The antitrust trial pitting Epic Games versus Apple got off to an explosive start, with lawyers for each company issuing passionate opening remarks on why they think their clients should prevail. As part of her opening statement, Apple lawyer Karen Dunn accused Epic Games of wanting Apple to be like Android, which is something Tim Cook and the gang have no interest in becoming.
"Epic wants us to be Android, but we don't want to be. And our consumers don't want that either. They want the choice," Dunn said, according to CNBC.

The statement was in reference to being able to install apps from outside Google's Play Store onto Android devices, a practice known as side-loading. This is not something that is officially supported on iOS devices—Tim Cook recent put a buzzkill on side-loading a security nightmare—though there are multiple ways of doing it, one of which involves jailbreaking an iPhone handset or iPad tablet.
It is an interesting comment, and while it is not the crux of the case, it plays into Apple's justification for charging developers a royalty rate that Epic Games feels is not fair. This whole kerfuffle began when Epic Games updated its Fortnite app to sidestep Apple's in-app payment system, thereby depriving it of a commission on purchases made in the game on iOS devices.
The move ran afoul of Apple's developer agreement, and it responded by kicking Fortnite out of the App Store. There have been a few other skirmishes between the two, but what it all boils down to is whether or not Apple should be allowed to maintain a "walled garden," as Epic's legal team described it. 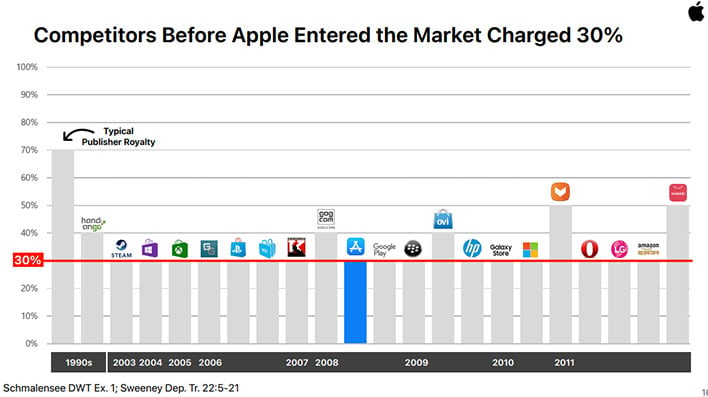 Apple charges a 30 percent commission on apps sold in the App Store, as well for in-app purchases, which it says is the industry standard. More recently, Apple restructured its revenue sharing policies, to allow for developers who make less than $1 million per year on all their apps to only pay a 15 percent commission. According to Apple, this applies to the "vast majority" of iOS app developers.
Epic Games makes much more than $1 million annually, though. During the first day of the trial, Apple's legal team said Epic Games has made $750 million from the App Store to date, so it is benefiting a great deal from the storefront. Apple also argued that Epic Games is not being altruistic on the behalf of mobile users far and wide. 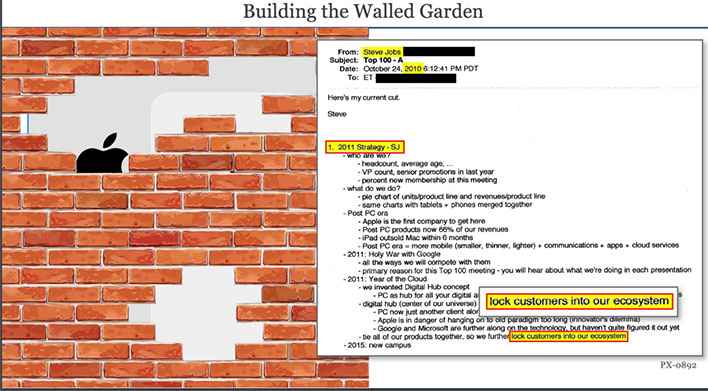 On the flip side, Epic Games says Apple's store policies are anti-competitive, and its claims about security and the quality of the iOS experience are merely excuses to exclude competition. The developer shared several internal Apple documents that allegedly show Apple wanting to lock users into iOS, and pointed to the company's high profits—Epic Games says the App Store had operating margins of 78 percent in 2019 and 75 percent in 2018.
"We have documents, long detailed PowerPoints prepared for Apple’s senior executive team that lay out the profitability of the App Store in regular presentations given multiple years in a row," Epic Games lawyer Katherine Forrest said.
Apple countered by saying the documents are being pulled "out of context in this case." In short, the lawyers are doing lawyer things, while we all sit back and get to watch it unfold. How it ultimately plans out remains to be seen, but if Day 1 is any indication, this is going to be a dogfight.