While the topic comes up on occasion, one thing iOS users will never be able to do is sideload applications on iPhone and iPad devices, at least not without official support from Apple. Jailbreaking is another story, of course. But as far as native support goes, Apple has taken a very different approach to sideloading than Google. Lest there be any doubt about where the company still stands, Apple CEO Tim Cook talked at length about security, privacy, and why sideloading is not going to happen.
Simply put, the hard line stance Apple is taking against sideloading even as the European Union proposes legislation that would force the company's hand is rooted in a belief that it would "destroy the security" of its mobile devices. Or at least that is what the company is outwardly saying on the topic.
"Current Digital Services Act language that is being discussed would force sideloading on the ‌iPhone‌. This would be an alternate way of getting apps onto the ‌iPhone‌. As we look at that, that would destroy the security of the ‌iPhone‌ and a lot of the privacy initiatives that we've built into the App Store, where we have privacy nutrition labels and App Tracking Transparency that forces people to get permission to track across apps," Cook during a virtual interview at the VivaTech conference.
What exactly is sideloading? It is the practice of installing applications outside of official marketplaces, those being the App Store on iOS and Google Play on Android. Google disables this functionality by default on Android devices, but all that stands between a user and an APK (Android Package Kit) downloaded from a place like Amazon is a pop-up warning.
Apple does not warn iOS users of the dangers associated with installing apps outside the App Store, and instead just blocks the functionality to sideload outright. From the company's vantage point, it is too big of a security and privacy risk. And according to Cook, Android is worse for wear as a result of sideloading, with far more malware than what is found on iPhone and iPad devices.

"Android has 47 times more malware than iOS does," Cook added. "It's because we've designed iOS in such a way that there's one app store and all of the apps are reviewed prior to going on the store. And so that keeps a lot of this malware stuff out of our ecosystem, and customers have told us very continuously how much they value that, and so we're going to be standing up for the user in the discussions."
Cook may have plucked that figure from one of Nokia's annual threat intelligence reports. The one for 2019 suggested that Android devices were responsible for 47.15 percent of malware infections, versus 35.82 percent for Windows PCs, 16.17 percent for Internet of Things (IoT) devices, and less than 1 percent for iPhone handsets. 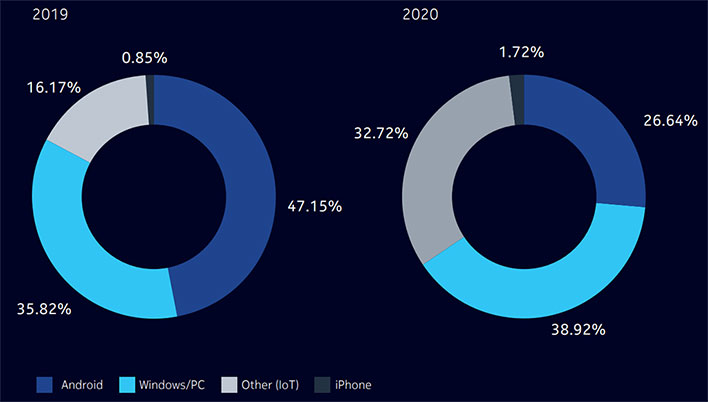 It also might be an outdated stat, if that is where he is getting his information from. Nokia's threat intelligence report for 2020—the most recent one—says Android devices account for 26.64 percent of malware infections, versus 1.72 percent for iPhone handsets. That is still a sizable gap, though, and speaks to Cook's point.
We are not saying we agree with Apple's helicopter parenting when it comes to iOS devices, just that Cook is correct in claiming that more malware ends up on Android devices than iPhones and iPads, even if his numbers are off. How of that is due to sideloading? We don't know, but surely a portion of it.
Cook also talked quite a bit about privacy during the 30-minute virtual interview.
"We've been focused on privacy for over a decade. We see it as a basic human right. A fundamental human right," Cook said. "And we've been focused on privacy for decades. Steve used to say privacy was stating in plain language what people are signing up for and getting their permission. And that permission should be asked repeatedly."
Cook was not so forthcoming about the environmental impact of creating and shipping so many iPhone devices, saying only that "a great product for the user and a great product for the planet can be one in the same." So you heard it here first, folks—the iPhone 13 will be edible when it arrives (not really, please don't attempt to eat it).