Word to the wise, if you're a content creator or otherwise dabble in photo and video editing, Apple's newest base model MacBook Pro with an M2 processor can become a real slog when weighed down with heavier workloads, according to some tests posted on a popular YouTube channel. A higher SKU is shown to be markedly faster in some instances, while the baseline model sometimes borders on unusable.

You may recall that YouTube channels Max Tech and Created Tech both posted videos last week highlighting the downgraded 256GB SSD performance on the baseline M2 MacBook Pro compared to the baseline M1 MacBook Pro. What came to light is a change is how Apple implemented the SSD this time around.
On the M1 MacBook Pro, all models sport a pair of NAND flash memory chips for the SSD storage scheme. But on the baseline M2 MacBook Pro with 256GB of storage, Apple switched to a single NAND flash memory chip. This matters because in dual-chip configurations, each one can connect separately the M2 processor (or M1 in the previous gen models) and fill two storage buses in parallel. But going with a single-chip solution effectively cuts the bandwidth in half.
The other difference between the baseline MacBook Pro models and a higher SKU is the amount of RAM. Apple's least expensive M2 and previous generation M1 models sport 8GB of RAM, while stepping up a couple SKUs doubles the RAM to 16GB. So you're looking at 8GB of RAM paired with a 256GB SSD, or 16GB of RAM paired with a 512GB SSD.
Following up on the initial video showcasing the degraded storage on the baseline M2 MacBook Pro, Max Tech posted another video, this time comparing the performance of real-world workloads between the 8GB/256GB and 16GB/512GB models. It wasn't pretty. 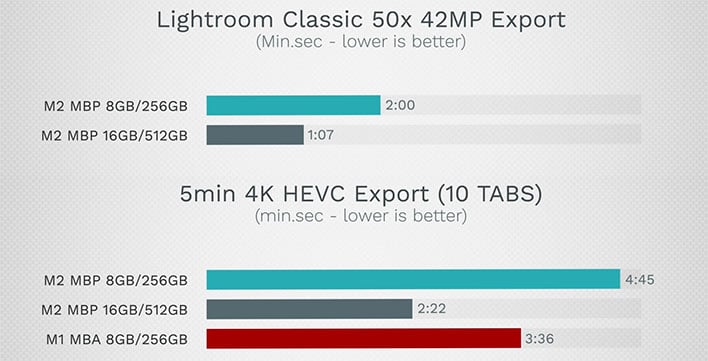 The channel ran a series of tests and benchmarks, a couple of which you can see in the chart above. These tests are intended to show what the channel considers typical usage of a creator who is considering a MacBook Pro, which might include exporting dozens of RAW images in Lightroom Classic with a handful of browser tabs open in the background, and so forth.
In Lightroom Classic, exporting 50 RAW 42MP mages was nearly twice as fast on the 16GB/512GB MacBook Pro versus the 8GB/256GB model. And when exporting a 5K HEVC video with 10 tabs open in the background, the the 16GB/512GB model completed the task in half the time. This year's baseline M2 MacBook Pro was even significantly slower in this test than last year's baseline M1 MacBook Pro.
Part of the problem is that having just 8GB of RAM is not really enough for heavier content creation workloads. However, switching to a single chip SSD solution compounds the problem. Having less RAM means a system will be quicker to leverage swap memory (disk spaced used as RAM), which yields a performance hit in and of itself. But in this case, the slower storage of the baseline M2 MacBook Pro adds to the performance degradation.
A casual user probably won't run into this situation very often. But someone buying a MacBook Pro for more than just casual usage might, and as demonstrated in Max Tech's video, the results ranged from a minor performance impact to a maddeningly slow and unresponsive system. And since the RAM and storage are not user-upgradeable on the MacBook Pro, anyone will be performing heavier workloads should really consider the 16GB/512GB SKU, or at least the 8GB/512GB SKU (only the 256GB SSD on tje M2 MacBook uses a single chip NAND solution.

Update: Clarification added regarding the next SKU up in the M2 MacBook Pro lineup—it still has 8GB of RAM, but a 522GB SSD with dual NAND chips instead of a single NAND chip.
Top Image Source: Max Tech (via YouTube)