Earlier this month, Apple unveiled its second generation M2 processor with some notable upgrades over the previous generation M1. It's a physically bigger SoC that packs 20 billion transistors, and supports up to 24GB of fast unified memory with 100GB/s of memory bandwidth, which is 50 percent higher than the M1. That's all well and good, but for whatever reason, Apple appears to have gimped the SSD storage on the baseline MacBook Pro with an M2 chip (compared to the M1 model).
This has been observed in at least two popular YouTube channels—Created Tech and Max Tech. Both took a look at the M2-powered MacBook Pro with 256GB of SSD storage, and both saw a sizeable drop in disk performance compared to the M1 model with the same capacity SSD.
Starting with the latter, Max Tech recorded drive performance with the Blackmagic SSD benchmark and saw sequential read speeds go from 2,900MB/s on the M1 MacBook Pro to 1,446MB/s on the M2 MacBook Pro. That's a greater than 50 percent decline in performance. Similarly, the sequential write test show a nearly 40 percent drop in performance, going from 2,215MB/s (M1 MacBook Pro) to 1,463MB/s (M2 MacBook Pro).
Likewise, Created Tech also observed disturbing storage performance disparities between the two models. In AKA, the M1 MacBook Pro benched around 98 percent faster in read speeds and 45 percent faster in writes compared to the M2 MacBook Pro model, both with a 256GB SSD. Interestingly, write speeds were roughly the same when running AJA, but for reads, it showed the M1 MacBook Pro running 156 percent faster. So what gives? 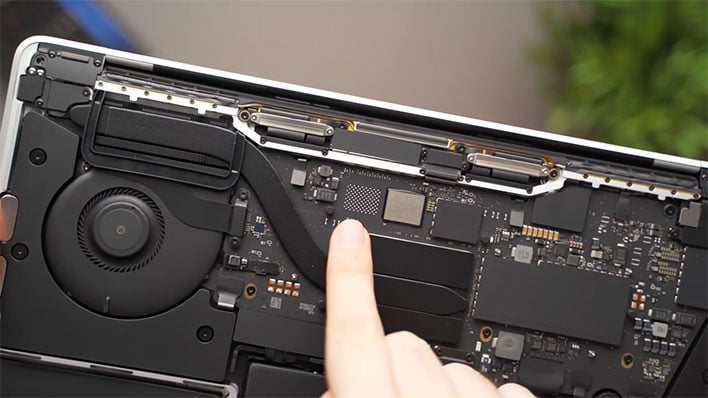 Teardowns of the MacBook Pro models revealed a key difference in the storage arrangement. On the newer M2 MacBook Pro, there's a single NAND flash memory chip, whereas the M1 model splits the storage across two chips. Same goes for larger capacities on the M2 model—if opting for 512GB of SSD storage or more, there are two NAND flash chips instead of one.
Turns out this can have a big impact on storage performance. In dual chip configurations, each one can connect separately to the M2 processor (or M1) and fill two storage buses in parallel. It's not quite RAID 0, but somewhat similar in concept.
This is unfortunate, but there are a couple of silver linings. One is that you may never even notice a speed difference, because the storage scheme is still faster whether there's one NAND chip or two. And those who are likely to really hammer the storage subsystem, they'll probably opt for more capacity than the 256GB base model anyway.
Still, it's disappointing when you consider that this was not a limitation of the previous generation model. The M2 is a big upgrade over the M1, and you don't (or shouldn't) expect that Apple will scale things back in other areas from one generation of MacBook to the next.
Anyway, check out the Created Tech and Max Tech videos for a broader comparison.