Apple made a handful of announcements at its WWDC 2022 keynote today, not the least of which is a next-generation addition to its custom Arm-based silicon. As was expected, Apple announced its M2 system-on-chip (SoC). It's a refined slice of silicon that packs 25 percent more transistors than its base M1 silicon introduced in November 2020, though it's not actually the fastest chip in Apple's arsenal.
The top performance still belongs to the M1 Pro (34 billion transistors), M1 Max (57 billion transistors), and M1 Ultra (114 billion transistors), the latter of which is the biggest and baddest with 20 cores in a 16+4 configuration and either 48 or 64 GPU cores and 32 Neural Engine cores. For the time being, the M1 Ultra is still the burliest of the bunch. 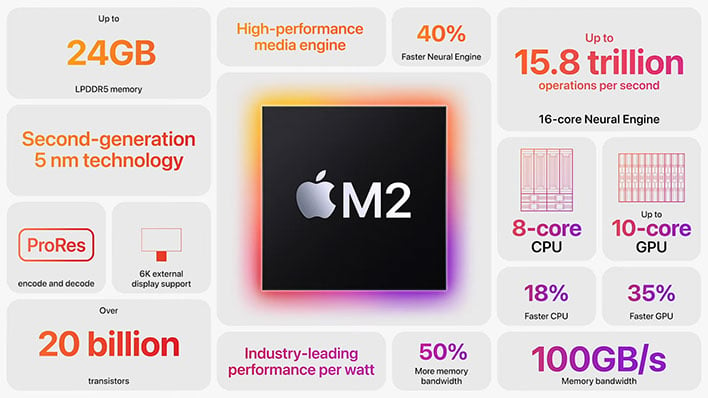 So why use the M2 designation here? Simply put, this is the baseline config of Apple's next-gen stack, built on an enhanced second-gen 5-nanometer node. We fully expect Apple to follow this up with M2 Pro, M2 Max, and M2 Max iterations at later dates, perhaps on an even further refined node. That's a discussion for another day, though.
What we have here is an M2 SoC with a physically bigger footprint than the M1. It's packing 20 billion transistors with several enhancements over the base M1 config. including up to 24GB of fast unified memory with 100GB/s of memory bandwidth, which is 50 percent higher than the M1.
"M2 starts the second generation of M-series chips and goes beyond the remarkable features of M1," said Johny Srouji, Apple’s senior vice president of Hardware Technologies. "With our relentless focus on power-efficient performance, M2 delivers a faster CPU, GPU, and Neural Engine. And along with higher memory bandwidth and new capabilities like ProRes acceleration, M2 continues the tremendous pace of innovation in Apple silicon for the Mac."
A cursory glance at the core breakdown wouldn't necessarily reveal all that. For example, the M2 still wields an 8-core CPU with a 4+4 split (high performance + high efficiency). But Apple says they have been significantly enhanced, noting they're faster and feature fatter cache allotments.

The goal is to offer better performance at a more attractive power curve than what might be seen in the x86 space. This is what Apple has been hanging its hat on. And in this case, Apple is touting what it claims is an improvement of the "industry-leading performance per watt" of the M1 with an 18 percent faster CPU (multi-threaded), 35 percent faster GPU, and 40 percent faster Neural Engine, in addition to those juicy memory gains. 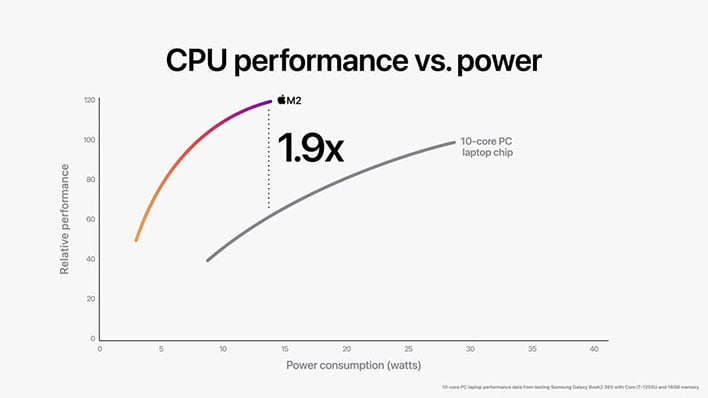 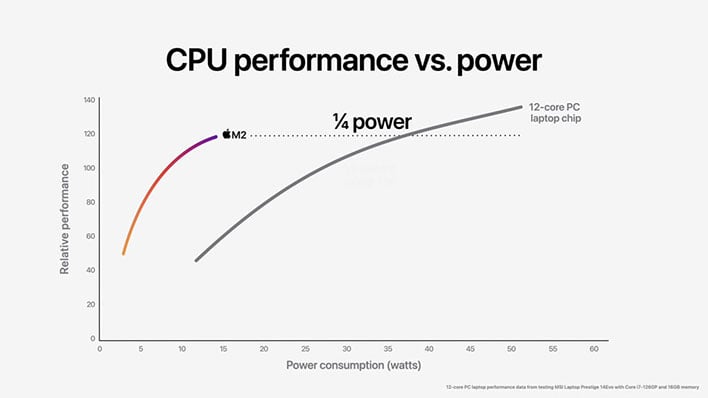 "Compared with the latest 10-core PC laptop chip, the CPU in M2 provides nearly twice the performance at the same power level. And, M2 delivers the peak performance of the PC chip while using just a quarter of the power," Apple says.
"When compared to the latest 12-core PC laptop chip—which needs dramatically more power to deliver an increase in performance and is therefore found in thicker, hotter, more noisy systems with less battery life—M2 provides nearly 90 percent of the peak performance of the 12-core chip while using just one-fourth the power," Apple adds. 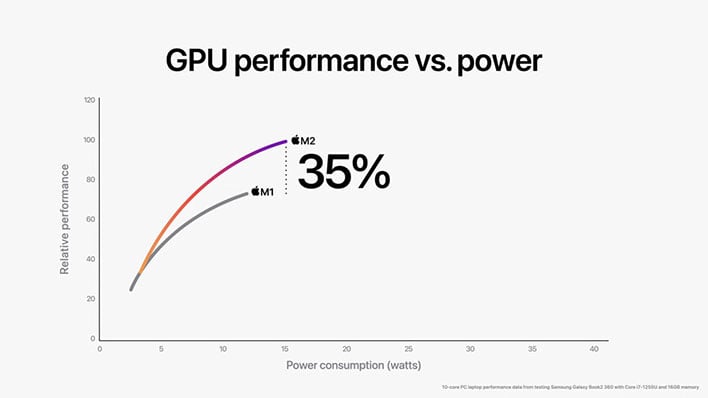 Apple makes similar claims about the M2's GPU performance. According to Apple, the performance versus power is 35 percent superior to the M1. Compared to a 10-core PC laptop, Apple claims a 2.3x improvement, further claiming that the M2's GPU can match the peak performance of a 10-core PC laptop while using a fifth of the power.
Other notable highlights include...
It's an intriguing chip and we look forward to putting Apple's claim to the test as soon as we can. The base M2 makes its debut in a completely redesigned MacBook Air that was also announced today, and a retooled 13-inch MacBook Pro.