Apple sent a bit of a shock wave through the tech world when it announced plans to phase out the use of Intel processors inside its entire Mac lineup, in favor of its own custom silicon based on ARM. Barring any hiccups, the transition phase will stretch out over the next two years. One of the questions this raised was, what will happen on the GPU side? On that end, it looks like Apple will kick third-party GPUs to the curb as well.
The move from a x86 foundation to an ARM-based platform is interesting on a number of levels, not the least of which is how it potentially affects current-generation Macs (some analysts believe the announcement essentially amounts to Apple putting a bullet in current MacBooks). But it is perhaps most intriguing in regards to Apple's potent Mac Pro desktops, where high end graphics are key components.
Be that as it may, there is a new slide from Apple (as spotted by Twitter user Longhorn) that seemingly indicates its intent to fully transition over to its own GPUs as well. Have a look...

"The future will be very interesting. MacOS ARM64 according to Apple removes support for AMD GPUs too, Apple GPUs all the way," Longhorn notes.
This is an official slide plucked from a presentation at WWDC 2020 titled, "Bring Your Metal App to Apple Silicon Macs." It speaks to the Tile Based Deferred Rendering (TBDR) GPU architecture for Macs based on Apple's own silicon, and how developers can "translate or port your graphics intensive app over" to the platform.
"We'll look at how TBDR compares with the Immediate Mode Rendering pipeline of older Macs, go through common issues you may face when bringing an app or game over, and explore how to offer incredible performance when building with the native SDK," Apple explains.
Moving away from third-party GPUs was not a foregone conclusion, even with the transition from x86 to ARM. As noted by Hexus, GPUs from AMD, NVIDIA, and Intel are compatible with the tiled architecture Apple is pushing, as are GPUs from Qualcomm and IMG. 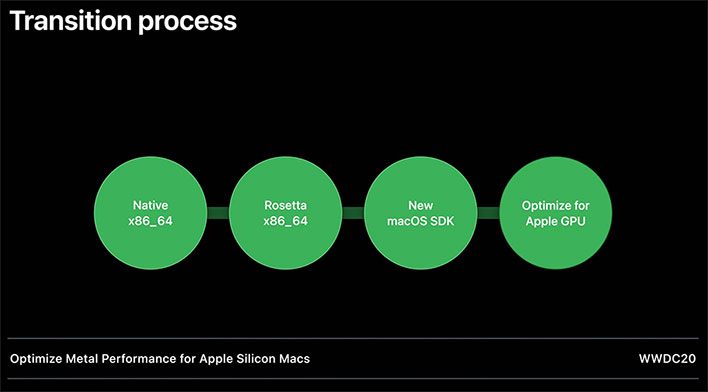 Nevertheless, Apple sees numerous benefits in moving away from third-party GPUs and optimizing its Metal API for its own silicon. According to Apple, this will lead to faster performance and better power efficiency, along with support for new Metal features in macOS. It will also play into Apple's plans to align experiences across macOS, iOS, iPadOS, and tvOS.
This still leaves us with questions. While this could work (and potentially work well) on something like the MacBook Air, what will performance be like on future Mac Pro desktops? And will support for third-party GPUs through an external graphics box be an option, or is that nixed as well?
Answers will eventually come, but as of this moment, all we can do is ponder.