As part of an effort to accelerate its investments in the United States, Apple announced it is committing more than $430 billion over the next five years towards different projects across the country, including a new high-tech campus being built in North Carolina. According to Apple, these investments will lead to the creation of 20,000 jobs across the country.
It is a massive commitment of funds for sure, though Apple is in position to do it. At the end of December, Apple posted record revenue of a little over $111.4 billion, resulting in a profit of $28.7 billion for the quarter. And at present, the company's market capitalization sits at $2.25 trillion, based on its current share price of $134.32.
The $430 billion Apple plans to invest is a 20 percent increase over the $350 billion figure it announced in 2018. Apple envisions spurring American innovation across the country. The investment also includes tens of billions of dollars for next-gen silicon development and 5G innovation across nine US states, Apple says. However, its total investment is intended to reach every US state.

"At this moment of recovery and rebuilding, Apple is doubling down on our commitment to US innovation and manufacturing with a generational investment reaching communities across all 50 states," Cook said in a statement. "We’re creating jobs in cutting-edge fields—from 5G to silicon engineering to artificial intelligence—investing in the next generation of innovative new businesses, and in all our work, building toward a greener and more equitable future." 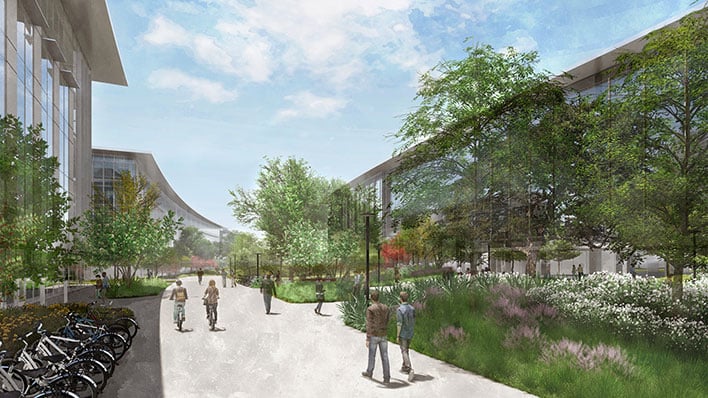 Part of Apple's overall investment includes $1 billion in North Carolina, with the creation of a new campus and engineering hub in the Research Triangle area. Apple says this alone with lead to 3,000 new jobs in machine learning, artificial intelligence, software engineering, and other high-tech fields.
"As a North-Carolina native, I’m thrilled Apple is expanding and creating new long-term job opportunities in the community I grew up in," said Apple COO Jeff Williams, who received a Master of Business Administration (MBA) from Duke University.
Apple's plans are part of a larger industry shift towards fab expansion beyond Silicon Valley. Intel, for example, is investing $20 billion into two new fabs in Arizona. It's also not terribly surprising, given Apple's desire to be as self-reliant as possible—it is in the process of shifting its product lines away from Intel hardware to its own Apple Silicon designs, for example, starting with the M1.

In addition to the campus, Apple said it is setting up a $100 million fund to support schools and community initiatives in the Raleigh-Durham area, and across the states. Another $110 million will go towards infrastructure to dozens of counties in North Carolina, for things like broadband expansion, roads and bridges, and schools.
"When up and running, Apple’s investments are expected to generate over $1.5 billion in economic benefits annually for North Carolina," Apple said.
It's not just North Carolina that will see an influx of spending on Apple's part. Other parts of Apple's $430 billion investment will goes towards adding a combined 8,000 employees to its San Diego and Culver City teams in California, a construction of a campus in Texas, a new data center in Iowa, and more.