Almost half a century ago, Apple co-founders Steve Jobs and Steve Wozniak demonstrated and then released the very first Apple computer, which later became known as the Apple-1. Only 200 of the hand-built machines were ever made, 175 of which were sold to a computer shop in Mountain View, California. Out of those, it's estimated that 80 still exist today, and one of them is headed to the auction block.
For as rare as these machines are, they do pop up at auction from time to time. We last wrote about one last November when a wooden Apple-1 that was purchased for $650 in 1977 fetched $500,000 at John Moran Auctioneers. Being encased in Koa, a special kind of wood native to Hawaii and in short supply, made it even more rare. 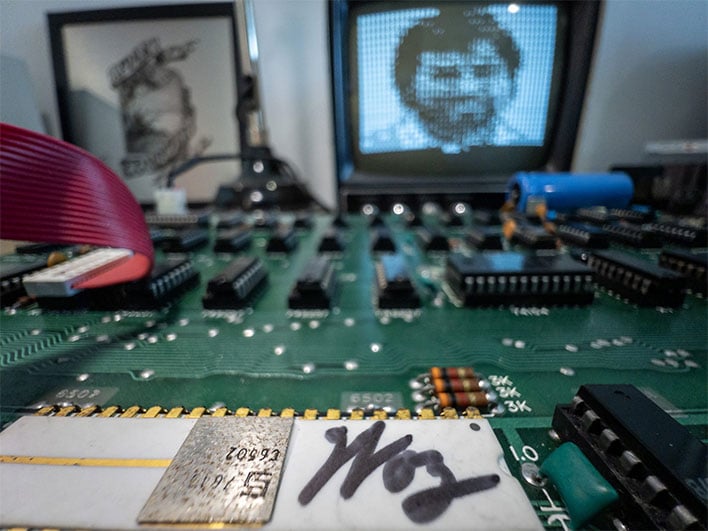 The Apple-1 that's headed to auction now is special for a different reason—it bears Woz's autograph on the microprocessor. It also still has "almost all of its original components" and is fully functional without any further restoration or configuration required.
It's currently owned by Jimmy Grewal, a avid Apple collector and founder of The AAPL Collection, a private museum in Dubai filled with notable vintage Apple computers and accessories.
"I began collecting vintage Apple products in 1995 while studying at Duke University, but my interest in Apple and its products actually began forty years ago in Dubai when my parents purchased our first Apple computer," Grewal says. "Today our collection includes nearly 200 Apple computers as well as numerous accessories and memorabilia."
"The proceeds from the sale of this Apple-1 will be used to create more opportunities for the public to see the collection; either in the form of pop-up exhibitions or by the establishment of a permanent venue where it can be more easily appreciated by the public," Grewal adds.

It's believed this particular Apple-1 could be the first one that was ever used outside of North America. As for the signature, it came about when Grewal had an opportunity to meet Woz in 2021, who was delighted to see the Apple-1 in such good condition after all these years. Not many Apple-1 computers bear his signature, and this is the only one known to have his autograph on the white ceramic 6502 processor.
In addition to the Apple-1, the winner of the auction will also receive various accessories from the computer's time period, including a monitor, power transformers, a tape recorder, and a 1970s designed Cherry keyboard in as-new condition, all restored and fully operational. Two issues of Interface Age magazine from 1976 will be included as well, both with a full-page advertisement for the Apple-1 and articles written by Jobs and Woz.
The AAPL Collection plans to list the Apple-1 on eBay on June 2, 2022, for a 10-day period. It's anticipated the bundle will rake in $464,000 to $485,000, though the record for an Apple-1 at action is $905,000.
Images Courtesy of The AAPL Collection