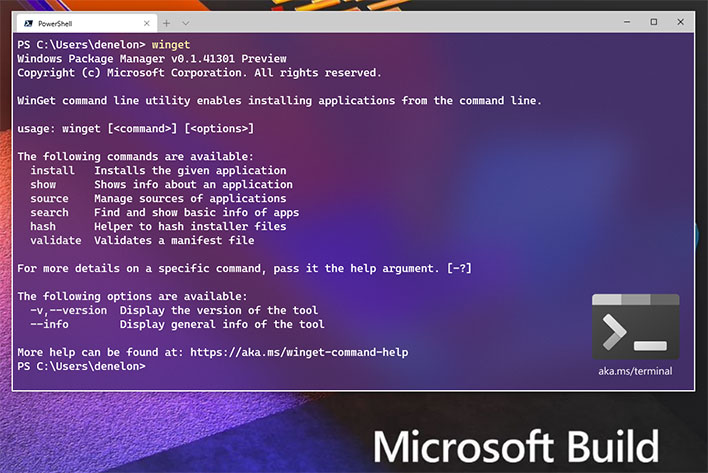 Seemingly out of nowhere (but not really), Microsoft formally introduced a Windows Package Manager in preview form at its Build conference last week. Called "winget," Microsoft said "just about every developer has wanted a native package manager" for Windows 10, and winget is the answer, though there is more to the story. As told by the developer of AppGet, winget is "very inspired" by his creation.
His name is Keivan Beigi, and in a post on Medium, he recounts how the head of Microsoft's Windows App Model engineering team initially courted him to come work at the Redmond outfit, before talks eventually stalled.
"Initially, I was a bit hesitant; I didn’t want to go to Microsoft to work on Windows Store, MSI engine or some other app deployment-related stuff. Shortly after, I was assured that I would spend all my time on AppGet. After about a month of prolonged email back and forth, we came to the conclusion that the arrangement will be very similar to an acqui-hire; Microsoft would hire me, AppGet would come with me, and they would decide if they wanted to rename it something else, or it would become Microsoft AppGet," Beigi explains.
This is where things took a turn, according to Beigi's account of events. He says there were several unanswered questions at this point, such as who he would report to and who would report to him. Several more months passed with "very slow email conversations," but he was eventually flown out to Seattle for a "full day of interviews/meetings."a
Beigi says he thought those meetings went well, but then things went silent. Six months passed without any communication from Microsoft, until just prior to the winget announcement. Beigi posted an email he received from his contact at Microsoft, who expressed condolences that the "PM position didn't work out." The email went on to thank Beigi for his "input and insights," and gave him a heads up that winget was about to be announced, with a shout out to AppGet.
"When I showed it to my wife, the first thing she said was, 'They Called it WinGet? are you serious!?' I didn’t even have to explain to her how the core mechanics, terminology, the manifest format and structure, even the package repository’s folder structure, are very inspired by AppGet," Beigi says.
The nature of open source is that anyone can develop freely available code and make their own creations with it, for the most part. This is something Beigi acknowledges. And to be clear, Beigi says he is not upset that he was not hired—he wasn't sure about relocating from Canada to the US anyway—and at no time assumed a deal was set in stone. He's also not upset that Microsoft released a decent package manager for Windows.
Instead, Beigi says it's the way that it was handled that bothers him, including the "slow and dreadful communication" and "total radio silence" towards the end.
"Code being copied isn’t an issue. I knew full well what it meant to release something open source and I don’t regret it one bit. What was copied with no credit is the foundation of the project. How it actually works. If I were the patenting type, this would be the thing you would patent. PS—I don’t regret not patenting anything," Beigi says.
Granted, we only have one side of the story here. If and when Microsoft offers up a comment on the situation, we will update this article.