Apex Legends fans who also own a Nintendo Switch will love the news that developer Respawn dropped during a live stream event hosted by EA. This fall, Apex Legends will land on the Switch game console giving fans of the game their first real opportunity to play on a mobile device under ideal conditions. Some players have taken Apex Legends mobile using a smartphone and a cloud streaming service, but that method is less than ideal.

As the game lands on the Nintendo console this fall, crossplay will also launch, allowing Apex players to compete against each other no matter what console they're on. Crossplay will enable players on the PS4, Xbox, PC, and Switch to compete against each other. Respawn has offered no hard details on how on exactly how the crossplay service will work. Being able to play against friends all using different consoles and the PC is a big deal for Apex gamers. Another change that PC gamers will appreciate is that Apex Legends will land on Steam. Currently, the only place to get the PC version of the game is on the EA Origin Store. 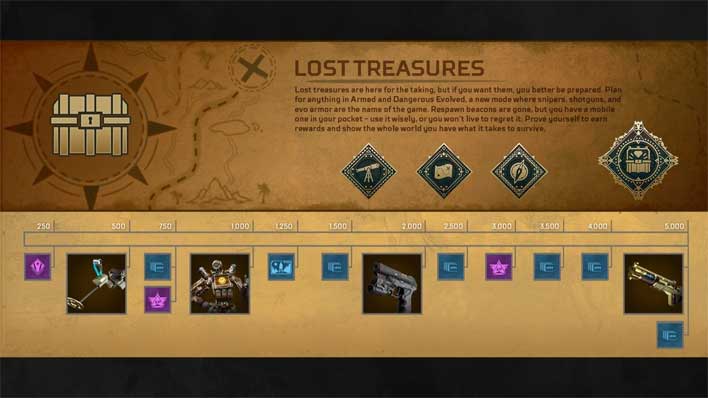 Respawn has also given up some details on its new Lost Treasures Collection Event that starts on June 23 and runs through July 7. The Lost Treasures Collection Event will feature a new limited-time mode called Armed and Dangerous Evolved. Players may be familiar with Armed and Dangerous, which is a sniper/shotgun only mode. The twist to the Evolved version of the mode is that the only armor available is Evo Armor, and all players will drop with the armor equipped. Blue, Purple, and Gold armor isn't available, and players will have to fight to reach the higher armor tiers.

During the Lost Treasures Event, players will be able to earn 1000 points per challenge set, and the challenge set will refresh daily. Players will be able to complete their battle pass challenges at the same time. Also added during the event is a Special Offers tab that offers seven additional cosmetics at a lower price point of 500 Apex Coins. The cosmetics are event limited and won't be eligible to return for at least six months, but will be available for the duration of the event. Another set of 24 themed, Limited-time cosmetics are being added to the game with all available via direct purchase using Apex Coins or Crafting Metals. Each pack will come with one event item and two non-event items.

Fans of the game should be excited about availability on the Switch, crossplay, and the new Lost Treasures Event. It has been a while since we talked about Apex Legends; the last was in February when we talked about the Kings Canyon map making a comeback.