Here's Everything You Need To Know About The Animal Crossing: New Horizons New Year's Event

It's New Year's Eve but it's also still 2020, the year of the pandemic that we long to put in the rear view. As such, it's very likely a whole lot of people will be celebrating the coming of the new year from the comfort of their own homes. For gamers who have been playing Animal Crossing: New Horizons, there's still a way to go out on the town, however, in virtual bliss at least. Right now and through midnight tonight, Tom Nook and Isabelle are hosting the New Year's Eve event with free gifts, fun seasonal items, and a countdown to the new year.

We'll start off with the free stuff. Turn on the Nintendo Switch and wander on over to the town plaza in front of Resident Services (which is closed for the holiday, by the way) where Isabelle and Tom Nook are hurriedly preparing for the countdown to midnight for 2021. Both characters have free items useful for the coming celebration. Tom will give out some Party Poppers, and Isabelle will gift players with a Light Stick, which everyone will apparently be waving come midnight. 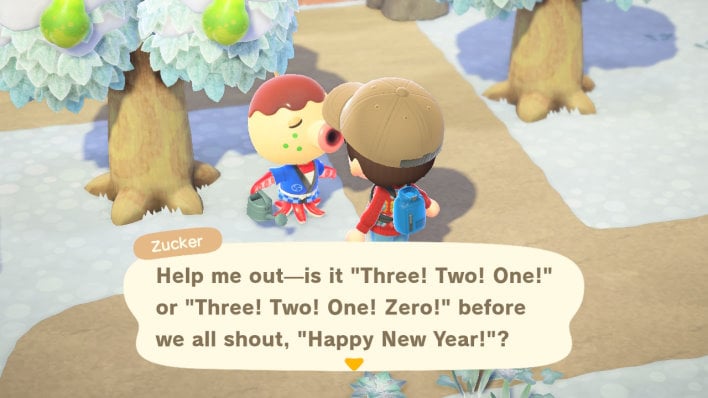 The plaza is all decked out with balloons, a cart with New Year's Eve party supplies, and a huge countdown timer working its way towards the big moment where 2020 will mercifully come to an end. Wander around town and check in with residents, too, who are also making their own preparations for the evening. We ran into more than one resident who needed a little assistance with counting down to 2021.

Once the dark of night arrives and the timer gets close to midnight, be sure to jump into the game, where everyone will gather in the plaza near the timer. According to YouTuber Crossing Channel, who time traveled in order to see what was coming, everyone will have their Light Sticks out and count down to midnight together. It's a really nice touch for the game, which celebrates many holidays, to have a way for gamers to celebrate together. Players can even fly to other islands via Dodo Codes so that they can share the moment with loved ones. 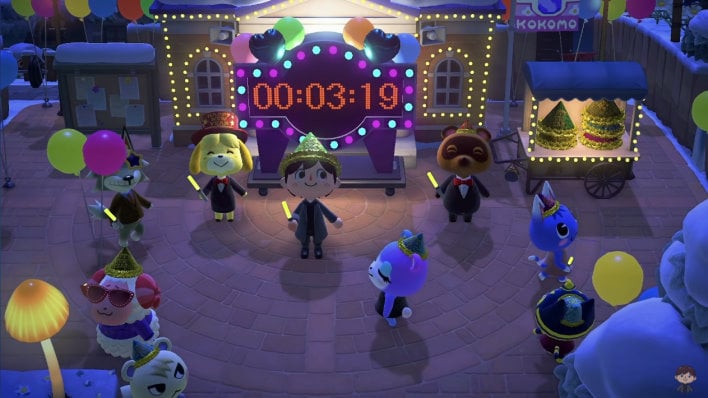 To go along with New Year's, Animal Crossing's Nook Shopping utility in the ABD -- the Automated Bell Dispenser -- or on the in-game smartphone, if you've progressed far enough, has some special holiday items for today and tomorrow. These items are available through the end of today:

Starting tomorrow, players will be able to order other items through Nook Shopping until January 15th, including some customary Japanese decorations for the New Year.