AMD is still on track to launch its next-generation Ryzen 7000 processors this fall, which means there are engineering samples out in the wild. It seems an overclocker has taken one of those ES chips (or perhaps even a qualification sample, though that's less likely) and ripped the integrated heat spreader (IHS) off the Zen 4 part, exposing some interesting details.
It's not entirely clear where exactly the image originated from—the folks at TechPowerUp came across it and opted not to post a link to the source as "the person who shared this picture should most mostly likely not have done so." That's a good call in our opinion, as there is no need to get someone in trouble over this sort of thing.
In any event, we get a look at the underside of the uniquely designed IHS. Apparently the Zen 4 CPU survived the delidding process and still works, as clarified in the comments section. That was a foregone conclusion, as delidding is a delicate process that can easily damage a processor if not performed correctly. Delidding tools help mitigate some of the risk, but we don't know if the overclocker built a custom kit for Zen 4 or went with a more brute force approach.
Either way, the underbelly of the IHS maps out the dual 5nm chiplet design with a pair of CCDs and the 6nm I/O die area, marked by the visible solder points in the image above. If this image is any indication, the IHS is glued to the CPU in eight different spots rather than a solid seal as exists on Zen 3/3+.
The other interesting thing to note is the proximity of the CPU dies to the edge of the IHS. In theory that could affect cooling. That could also perhaps be why the heat spreader appears to be so thick, assuming that such a design would work in the CPU's favor, as opposed to a thinner IHS to allow heat to be transferred to the cooler a little quicker. Or it could simply be to maintain a certain Z-height to ensure compatibility with existing models. 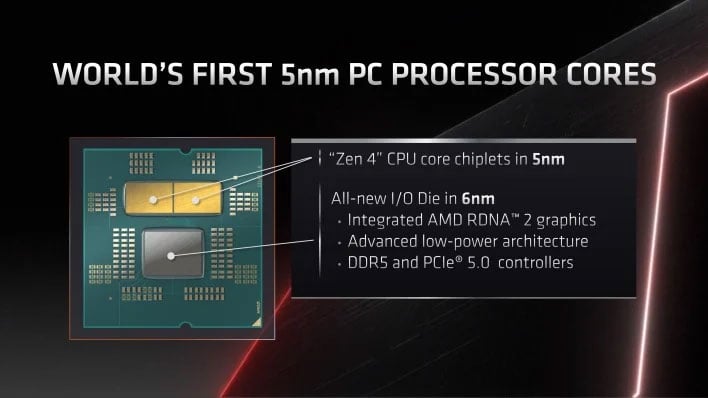 Zen 4 will introduce a new AM5 socket and a switch to a Land Grid Array (LGA) design like Intel has been using for a long time. This means the pins will be in the actual socket and not on the bottom of the CPU. We also know that Zen 4 will roll solo with DDR5 memory and offer up support for PCI Express 5.0 as well.
AMD has also confirmed that Zen 4 will serve up 1MB of L2 cache per core and hit max boost clocks of 5GHz or higher, resulting in what the company claims will be a greater than 15 percent single-threaded performance uplift over Zen 3.
Zen 4 is slated to arrive sometime this fall. In the meantime, big hat tip to TPU for sharing the delidded image.