AMD has not yet thrust its Zen 3 architecture into every possible CPU segment, though it has hit the main ones (consumer desktops and laptops, and the lucrative server market). One of the stones that still needs to be turned over is the high-end desktop (HEDT) category. Good news, though—rumor has it a Ryzen Threadripper 5000 series is destined for an August launch.
As a point of reference, AMD introduced its third-generation Ryzen Threadripper 3000 series based on Zen 2 in November of 2019. Zen 3, meanwhile, launched just four months ago with the introduction of AMD's Ryzen 5000 series desktop CPUs. So an August launch for a new round of Ryzen Threadripper processors is certainly plausible.

Whether it ends up happening or not, we'll have to wait and see. The information we have is coming from Yuko Yoshida (@KittyYYuko), a familiar name in the leak and rumor scene, who posted a tweet over the weekend saying, "In addition, in August AMD will release a new generation Threadripper processor" (via Google Translate).
To some extent, the Threadripper category has become a little less interesting, with AMD pushing up to 16 cores and 32 threads within its consumer desktop lineup (namely, the Ryzen 9 5950X). However, for serious content creators and professionals who can benefit from even more heavy metal at their disposal, the current Threadripper lineup scales to 64 cores and 128 threads (Threadripper 3990X). 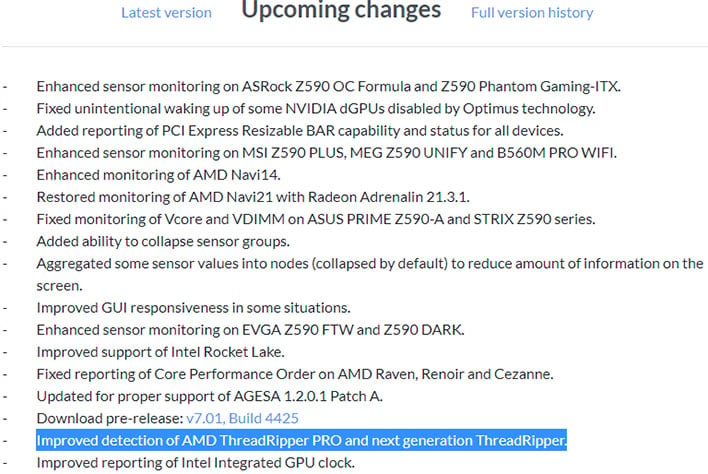 In other words, there is still reason to maintain a Threadripper line. It is also worth noting that the HWinfo utility lists "Improved detection of AMD Threadripper Pro and next-generation Threadripper" among its list of upcoming changes. That adds some credibility to the August launch rumor, or at least suggests a fourth-generation Threadripper lineup is otherwise right around the bend.
Codenamed "Chagall," the Ryzen Threadripper 5000 series is expected to be drop-in compatible with existing TRX40 motherboards, with a BIOS update of course. There have not been any leaked benchmark sightings relating to Chagall, though, so it is still anyone's guess what the lineup will look like and how it might perform.