AMD today expanded the reach of its Zen 3 architecture over to its professional line of mobile processors with the launch of the Ryzen Pro 5000 series. These new chips take aim at "premium business laptops," pairing the chip designer's suite of Pro technologies, including enterprise-class security bits, with the power of its latest generation CPU architecture.
The timing being what it is, AMD is also pitching its Ryzen Pro 5000 series as being ideal solutions for an increasingly remote workforce. For many people, day-to-day activities have changed dramatically in light of the COVID-19 pandemic, pushing workers into home offices (more so than before). And in doing so, the need for security is heightened.
"Navigating an increasingly distributed work environment requires more performance and security from our professional laptops. Businesses need to be confident they are investing in technology that will meet the needs of their employees, whether they are working remotely or from the office," said Saeid Moshkelani, senior vice president and general manager, Client Business Unit, AMD.

"The new AMD Ryzen Pro 5000 series mobile processors significantly increase the capabilities of ultrathin enterprise notebooks and deliver best-in-class user experiences with leadership performance, exceptional battery life and robust security features for every work environment," Moshkelani added.
As with previous generation Pro models, the latest chips sport enhanced features and capabilities geared towards offering heightened security and remote management. On the security front, the Ryzen Pro 5000 series takes a multi-layered approach with "embedded defenses at every level," from the hardware to the software. 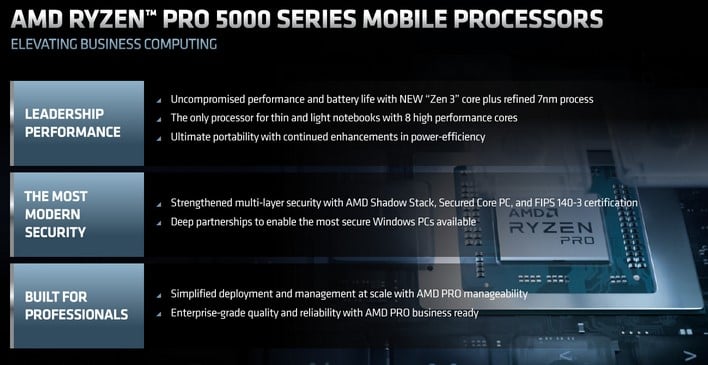 One of those is Memory Guard, which is exclusive to AMD's Ryzen Pro processors. This mainly consists of enabling system memory encryption to reduce the threat of physical memory attacks, even when a PC is in standby mode. Memory Guard is automatically enabled on Microsoft Secured-Core PCs, offering users a level of data and identity protection.

Ryzen Pro processors also feature AMD's Shadow Stack technology. This is essentially a hardware-based mechanism designed to mitigate malware attacks. And in addition to the new security features, the usual "Pro" remote management and deployment features for IT admins/enterprise are baked in, to simplify things for those tasked with deploying and managing business laptops. That's always been important, but arguably even more so in the current landscape.

You can think of these as basically a subset of the Ryzen 5000 mobile CPU stack, but with all the Pro features added for commercial/enterprise class notebooks. In addition, the Pro models feature 18 months of planned software stability, and 24 months of planned availability, so clients can buy into the latest Pro series without worry they will be obsolete or left behind in the next couple of years. 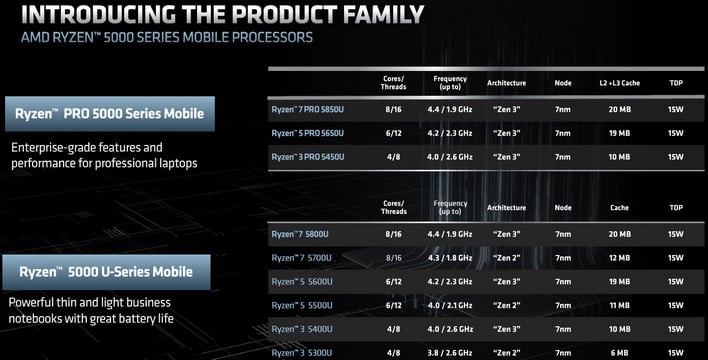 AMD is kicking things off with a relatively short stack—just three SKUs, those being the Ryzen 3 Pro 5450U, Ryzen 5 Pro 5650U, and Ryzen 7 Pro 5850U. The core specifications of all three are exactly the same as their non-Pro counterparts, the Ryzen 3 5400U, Ryzen 5 5600U, and Ryzen 7 5800U, respectively.
The initial lineup leaves AMD room to flesh things out with additional SKU, if it so chooses. As things currently stand, its Ryzen Pro 5000 series of mobile processors spans 4-core/8-thread, 6-core/12-thread, and 8-core/16-thread options, giving customers a range of performance and price points, depending on their needs. 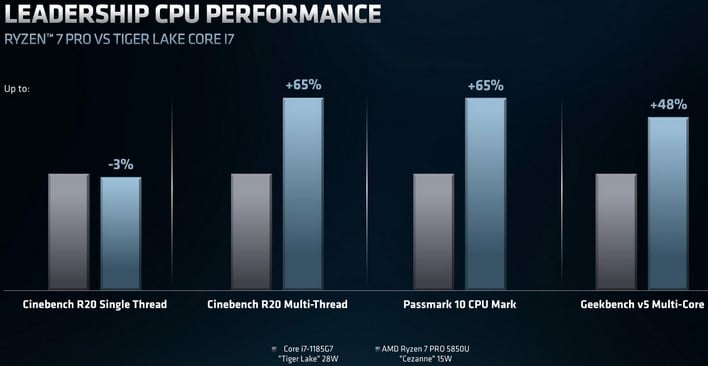 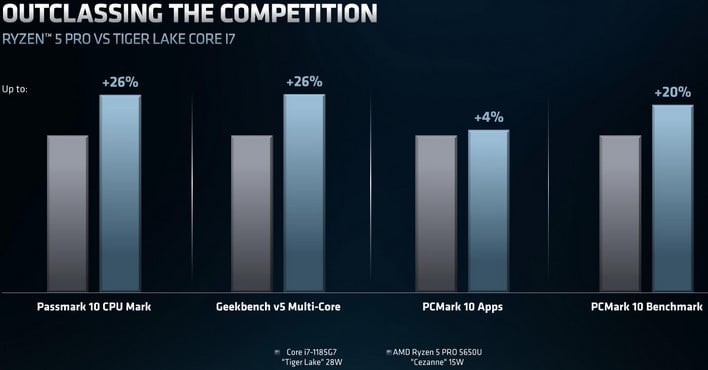 As you might expect, AMD is claiming mostly superior CPU performance compared to Intel's Tiger Lake processors. Interestingly, AMD's own internal benchmarking data shows its Ryzen 7 Pro 5850U coming in sightly behind a 4-core/8-thread Core i7-1185G7 in Cinebench R20's single-threaded performance benchmark, though just by up to 3 percent.
The insinuation there is that single-threaded performance is roughly equal, but when switching to multi-threaded workloads, the additional cores and threads of the Ryzen 7 Pro 5850U and Ryzen 5 Pro 5650U leave Tiger Lake in the dust. AMD shows performance gaps of up to 65 percent at the high end (Cinebench R20 multi-threaded and PassMark 10 CPU). 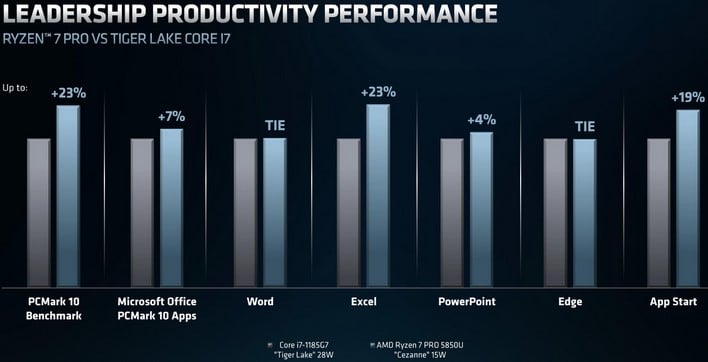 Switching the focus away from synthetic benchmark runs to real-world applications (mostly, anyway), AMD claims its Ryzen Pro 5000 series of mobile processors perform equally well to Tiger Lake in Edge and Word, and are up to 23 percent faster in apps like Excel. The general message AMD is making is that it leads the industry in mobile computing performance, and by pretty big margins in some cases.

You would think an upgraded architecture would lend itself to improved battery life as well, and indeed AMD says it does. Impressively, AMD more than doubled the battery life as measured by MobileMark 2018 when going from its Ryzen Pro 3000 series to the Ryzen Pro 4000 series. And now with the introduction of the Ryzen Pro 5000 series, AMD says users can expect another 1.5 hours at the top end. That works out to a 9.4 percent improvement—not too shabby.
As for availability, AMD says "top PC vendors" will be cranking out laptops sporting Ryzen Pro 5000 series mobile CPUs in the second quarter of this year (so right around the corner).

HP and Lenovo will be among the first to use the new Ryzen Pro 5000 processors, both with several different models planned, spanning traditional and 2-in-1 form factors. These will all be thin and light systems as well.
"The need for powerful, secure PCs that prioritize productivity and collaboration is more crucial than ever as we continue to embrace a more distributed and hybrid workforce," said Andy Rhodes, global head, Commercial Systems and Display Solutions, HP. "HP is committed to empowering employees and IT teams everywhere, and our continued work with AMD leads with innovation to deliver powerful and secure computing experiences to keep people connected and productive at home, in the office, or both."
"At Lenovo, we have a long tradition of providing our enterprise customers with innovative systems that deliver excellent performance and security and we are pleased to continue delivering on this promise with new laptops powered by the latest AMD mobile processors," said Jerry Paradise, vice president, Global Commercial Portfolio & Product Management, Lenovo PCSD. "The latest Lenovo ThinkPad laptop lineup with AMD Ryzen Pro 5000 series mobile processors will continue to deliver the incredible performance our business customers have come to expect from Lenovo and AMD."
Between Intel's 11th Gen vPro processors (Tiger Lake) announced at CES and AMD's new Ryzen Pro 5000 series, business users in need of added security and management capabilities have a lot of options to choose from.