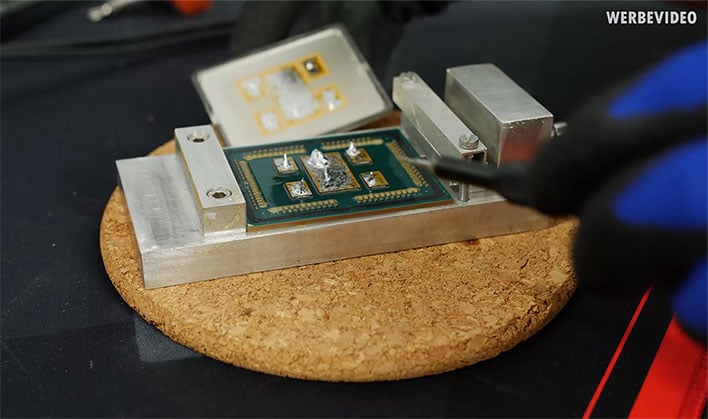 German overclocker and enthusiast Roman "der8auer" Hartung has successfully delidded a couple of AMD's latest generation Ryzen Threadripper processors, including the 3970X and 3960X. He then cleaned them up, applied thermal paste, and was successful in getting them to boot into Windows and run through Cinebench, though there were some hitches along the way.

Before he ripped off the integrated heatspreaders, der8auer tested the chips in an ASUS ROG Strix TRX40-E motherboard. For cooling, he used a Heatkiller IV Pro waterblock, 360mm radiator, and EK pump and reservoir. He then overclocked the Threadripper 3960X to 4.3GHz across all cores, with the voltage set to 1.392V.
That setup yielded temps of around 85-86C when running Cinebench R20, which does a good job of hammering all available cores and threads. That gave him a baseline to compare temps with, after delidding the processors.
Delidding is not for the faint of heart, especially when you are dealing with high-priced slices of silicon. In this case, der8auer started by taking a razor to the edges and slicing through the material that helps hold the IHS in place. He then placed the Threadripper 3960X into a specially designed block, heated it in the oven for several minutes, and then lifted the IHS off the assembly.
As you can see in the image at the top of this article, there are four CCDs surrounding the larger I/O die in the middle. Each one contains a glob of indium solder. What's most interesting, however, is the presence of traces on the empty spaces of the processor. This is presumably where additionally dies would go, namely for the 64-core/128-thread Ryzen Threadripper 3990X.

To get the processor to boot, der8aur had to modify the socket assembly. It was not easy to get the processor to boot into Windows and run normally. Der8auer reckons there is just not enough pressure being applied to from the waterblock to the CPU, which led to higher temps and errors. However, he did manage to get the system to boot, with temps being around the same as they were prior to removing the IHS.
Der8auer has some ideas on how he can improve things, but that will have to wait for another day. In the meantime, check out the video above to see the delidding process, and some cool shots of a naked Threadripper CPU.