Desktop processor sales have been on a precipitous decline over the past several weeks and months, and at least one analyst firm is forecasting a nearly double-digit percentage decline in PC shipments by the end of 2022. Even so, people are still buying CPUs, and picking up AMD processors at nearly double the clip as Intel chips at a major retailer.
The folks at Mindfactory routinely share CPU sales data, and Reddit user ingebor has made a habit of conveniently plotting out the figures in a series of graphs every few months. They've done it once again, giving us a snapshot of sales trends from April 2021 through June 2022. What the latest figures show is that the retailer is selling nearly twice as many AMD Ryzen processors as Intel CPUs. Have a look...

As you can see, the sales disparity between AMD and Intel CPUs has been trending in the former's favor each month throughout the first half of 2022. In June, AMD processors account for 63 percent of Mindfactory's CPU sales, compared to 37 percent for Intel. At the beginning of the year, the split stood at 57 percent and 43 percent, also in favor of AMD.
It's not all bad news for Intel, though. The sales data for June 2021 shows that there existed a much wider gap a year ago, with AMD processors accounting for 81 percent of the retailer's sales versus just 19 percent of Intel. The split was even bigger a month prior, at 85 percent (AMD) and 15 percent (Intel).
What changed since then is that Intel launched its Alder Lake lineup and has continued to flesh it out in both the desktop and mobile sectors. There's data for that as well... 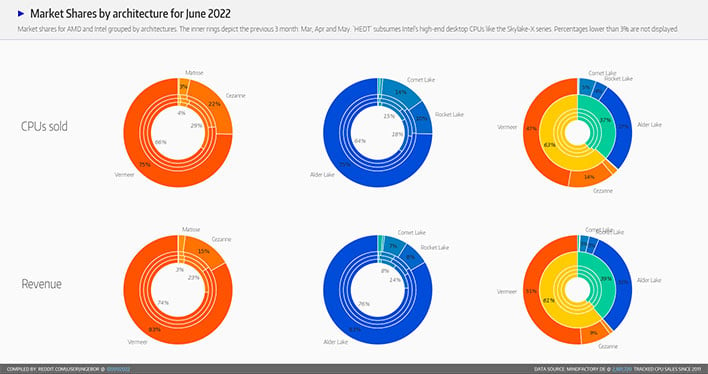 Looking at the sales breakdown of Intel CPUs, three quarters of processors sold are 12th Gen Alder Lake chips, while the rest are mostly split between Rocket Lake (11th Gen) and Comet Lake (10th Gen). Not surprisingly, Zen 3 also accounts for the vast majority of AMD processors sold.
The revenue split also favors AMD over Intel, though the margin is much narrower than it was a year ago. Have a look...

Mindfactory derives 61 percent of its CPU sales revenue from customers purchasing AMD Ryzen processors, while 39 percent comes from the sale of Intel chips. So AMD is winning there as well, though a year ago the split was significantly wider at 84 percent versus 16 percent in favor of AMD. And at its peak, 90 percent of the retailer's CPU revenue came from AMD processor sales.
It's important to note that we can't extrapolate this data to reflect the market as a whole. Even though Mindfactory is a popular retailer, it's one of many. And incidentally, Morgan Stanly analyst Joseph Moore recently said he expects AMD to see a "material correction" in the PC market this year and next. He further predicted that AMD's desktop-related revenue will decline 26 percent year-over-year by the end of 2022, and another 2 percent in 2023. At the same time, he's "optimistic" that AMD will keep growing in the data center, which is a higher margin sector.
Looking ahead, it's notable that AMD will be launching its Zen 4 CPUs and accompanying socket AM5 platform later this year. Likewise, Intel is gearing up to launch its Raptor Lake processors. We'll have to wait and see how these new products shake things up and affect the sales split at Mindfactory (and elsewhere).