HP seems to have tipped some official details on unreleased CPU hardware from AMD, and namely its upcoming lineup of Ryzen Pro 5000 series processors. A knowledge base article on the OEM's website lists three unannounced processors, including the Ryzen 7 Pro 5750G, Ryzen 5 Pro 5650G, and Ryzen 3 Pro 5350G.
This is not the first time HP has been the source of leaked information. It's not even the first time this month. Back on April 1st, we wrote about a series of HP listings that identified several Ryzen 5000G series APUs, including the Ryzen 7 5000G, Ryzen 5 5600G, and Ryzen 3 5300G, all three of which are destined for various upcoming desktops.
So are the newly leaked Pro series models, except they will find themselves shoved into business-class systems when they arrive. Here's a look at the lineup... 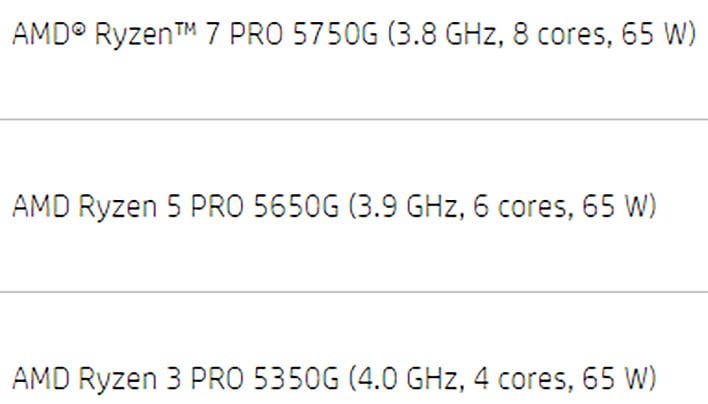 These are all based on AMD's latest generation Zen 3 architecture, with onboard graphics. Otherwise known as Cezanne, the upcoming professional APUs will feature certain hardware and features not found on AMD's mainstream consumer CPUs, such as Memory Guard, which provides real-time encryption of system memory, and added security mechanisms.

According to the support document, the Ryzen 7 Pro 5750G will be an 8-core chip with a 3.8GHz base clock and 65W TDP. The Ryzen 5 Pro 5650G, meanwhile, is listed as a 6-core slice of silicon with a 3.9GHz base clock and the same 65W TDP, while the Ryzen 3 Pro 5350G is shown as a 4-core APU with a 4GHz base clock and also a 65W TDP.
Like the Zen 2 chips they are replacing, all three models will undoubtedly support simultaneous multi-thread (SMT), meaning these are 8-core/16-thread, 6-core/12-thread, and 4-core/8-thread models. And if they follow in the footsteps of the non-Pro models, the two higher end SKUs will have 16MB of L3 cache, while the Ryzen 3 Pro part will have 8MB of L3 cache.
In semi-related news, AMD's unreleased Ryzen 7 5700G (not a Pro model) has surfaced in the wild again, as it nears release. 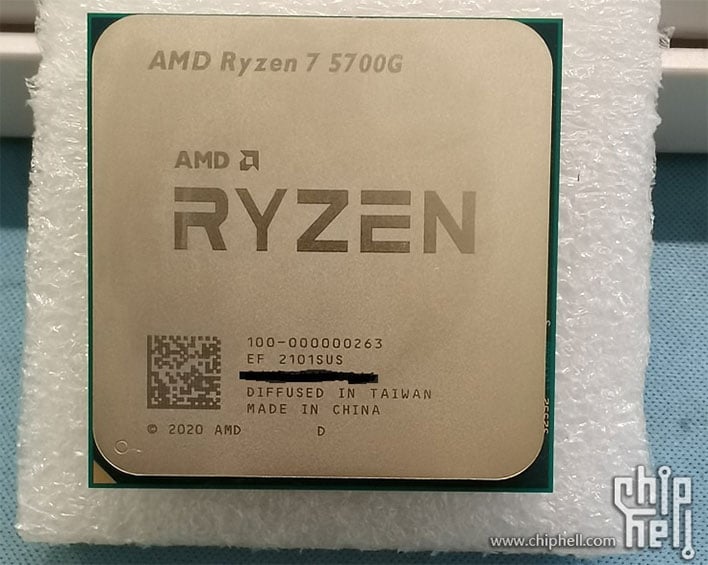 This is also a Cezanne part based on Zen 3 with onboard graphics, but without any Pro features. Like the Ryzen 7 Pro 5750G, it is an 8-core/16-thread processor with a 3.8GHz block. It's also shown as having a 4.6GHz boost clock and 16MB of L3 cache. And for the GPU portion, it's armed with AMD Radeon Vega 8 graphics sporting 512 stream processors and a 2GHz clock.
The chip was run through a handful of benchmarks. It's problematic to compare leaked data with official results, but that being said, its single-core CPU-Z score of 631.1 points puts it ahead of a Ryzen 9 5900H and not far behind a Ryzen 7 5800X.