HP is readying numerous desktop models built around AMD's not-yet-released (or even announced) Ryzen 5000G series APUs. The upcoming chips will pair CPU cores based on AMD's latest generation Zen 3 architecture with Radeon graphics, which is an increasingly intriguing proposition, given the current shortage of graphics cards.
The Ryzen 5000G series also marks the latest expansion of Zen 3 into yet another product segment, with AMD having already injected its desktop, laptop, and server CPUs with its newest architecture. However, the refreshed APU line does not officially exist at this precise moment. It will at some point, though, and lest there be any doubt, HP is busy updating some of its product listings.
Here's a look at one of them... 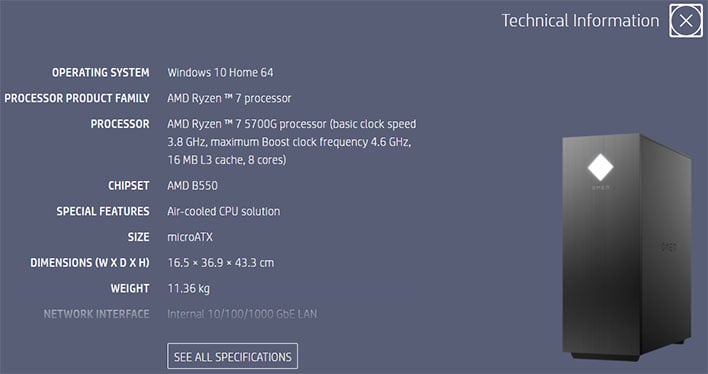 This is an Omen desktop that can be found at HP's domain in Finland. As to its updated hardware, based on prior leaks, the Ryzen 7 5700G figures to sit at the top of the Zen 3 APU (Cezanne) stack. And according to HP's product sheet, it will feature 8 cores and 16 threads racing along at 3.8GHz (base) to 4.6GHz (boost), with 16MB of L3 cache and a 65W TDP.
This replaces the Ryzen 7 4700G (Renoir), which is also an 8-core/16-thread APU, but with a 3.6GHz base clock, 4.4GHz boost clock, and 8MB of L3 cache. So between the faster clocks, double the L3 cache, and upgraded architecture, the Ryzen 7 5700G should be a significant upgrade, within the same power envelope.
Poking around HP's website in Finland, we can see other desktops with unreleased APUs, including a Pavilion gaming PC. Have a look.... 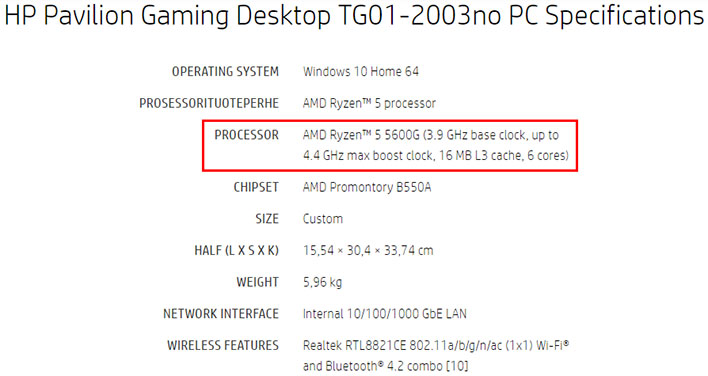 The Ryzen 5 5600G will replace the Ryzen 5 4600G, which offers the same core and thread counts, but runs 200MHz slower (both base and boost) and has half the amount of L3 cache.
One thing we were not able to dig up is a listing for the Ryzen 3 5300G, another Cezanne chip. However, prominent leaker and Twitter user @momomo_us gets a hat tip for coming across all three APUs somewhere on one of HP's portals. Have a look...

Looking at the bottom entry, we see confirmation of the Ryzen 3 5300G and its specifications, as known by HP. Assuming HP's information is accurate, the Ryzen 3 5300G will be a 4-core/8-thread APU with a 4GHz base clock, 4.2GHz max boost clock, and 8MB of L3 cache.
What stands out is the reduced cache, which makes sense—AMD did the same thing with its Ryzen 3 4300G, which features 4MB of L3 cache instead of 8MB like the higher end Renoir APUs. And once again, the Ryzen 3 5300G will bring twice as much L3 cache to the table, along with 200MHz faster clocks at the top and bottom.
It remains to be seen if AMD will offer up its Zen 3 APUs as standalone products for consumers, or if they will be OEM-only parts. Either way, we imagine they will arrive soon, and we now know what kind of specifications we are looking at for Cezanne.