It is widely expected that AMD will announce some new chips at the Consumer Electronics Show (CES), including a line of mobile CPUs based on Zen 3. Might we also see a fresh batch of Ryzen processors with Radeon graphics, too? Time will tell. Otherwise known as an APU, a recent benchmark leak highlighted one of the APUs that will eventually see the light of day (presumably), that being the Ryzen 7 5700G.
AMD does not use the term APU (accelerated processing unit) these days, but no matter term you want to run with, these chips combine CPU and GPU cores in the same package. The company's top APU offering right now is the Ryzen 7 4700G for OEMs. Based on Zen 2 (codenamed Renoir), the chip features 8 cores and 16 threads clocked at 3.6GHz to 4.4GHz, along with 8MB of L3 cache. It also sports 8 graphics cores clocked at 2.1GHz.
The upcoming Ryzen 7 5700G will replace it at the top of the APU totem pole, with Zen 3 underneath the hood. Who knows exactly when, but in the meantime, it has made a benchmark cameo at Geekbench. Have a look... 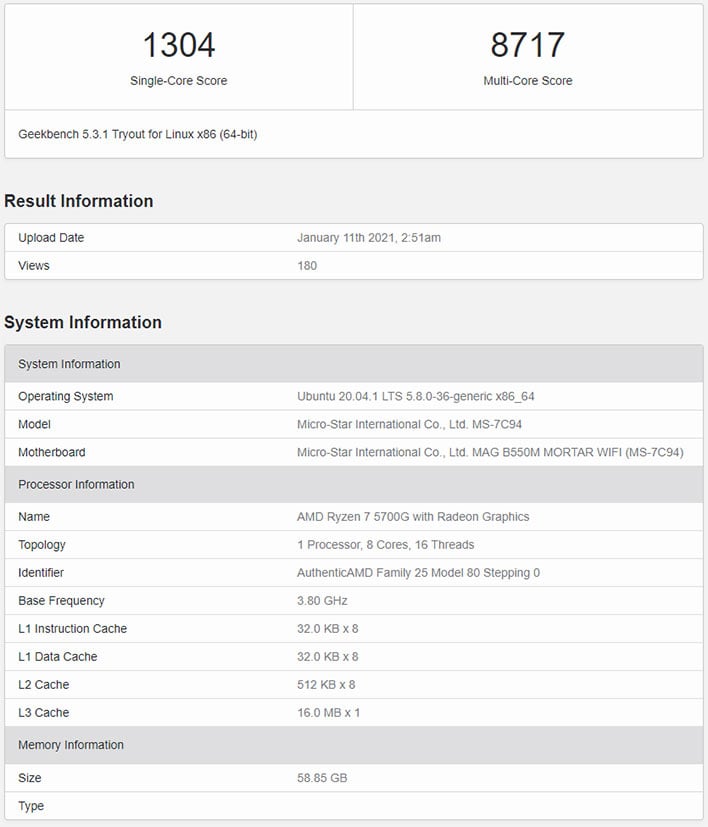 Like the APU it is replacing, the Geekbench listing recognizes the Ryzen 7 5700G as having 8 cores and 16 threads of computing muscle. And according to the listing, it has a 3.8GHz base clock, which is 200MHz higher than the Ryzen 7 4700G. AMD also managed to double the amount of L3 cache, from 8MB on the Zen 2 part, to 16MB on the Ryzen 7 5700G.
It's worth noting that USB-IF recently outed the Ryzen 7 5700G, so we have little doubt it is headed for an actual launch. Based on the above specifications (assuming they are representative of the final silicon), we expect it to offer a decent performance bump over its predecessor.
As for the performance figures, it posted a single-core score of 1,304 and a multi-core score of 8,717. Comparing those scores with other systems a little tricky because it was run on Ubuntu, and performance metrics on Geekbench vary wildly between Linux and Windows.
That said, we spotted a recent entry for a Ryzen 7 4700G running on Linux (no mention of the specific distro), which posted a 1,271 single-core score and a 6,134 multi-core score.
Don't read too much into it, though, because from what we have seen on the desktop, a nominal jump in single-core performance (especially with a 200MHz advantage) is unlikely—the actual gap in performance is likely to be bigger. But as always with leaks, we'll have to wait and see.