A retailer in Thailand is flexing on social media with some delightful pictures of a whole bunch of Ryzen Pro 4000 processors, which are apparently ready to ship out to customers. What makes the flex noteworthy is not just the detailed pictures, but the fact that these processors were only supposed to be available to AMD's system integrator (SI) and OEM partners, at least at the outset.
Following months of leaks and rumors, AMD finally lifted the curtain on its 'Ryzen 4000 Series Desktop Processors with Radeon Graphics' and 'Ryzen 4000 Series Desktop Processors with Pro Technologies' on Tuesday. Despite the rather long-winded names and somewhat confusing model labels, these are essentially accelerated processing units (APUs) combining Zen 2 CPU cores with enhanced Vega graphics.
Or put another way, these are basically Ryzen 3000 desktop processors that have been injected with Vega graphics. For users looking to keep things relatively affordable by skipping a discrete GPU but still want some decent graphics performance, these are promising parts. 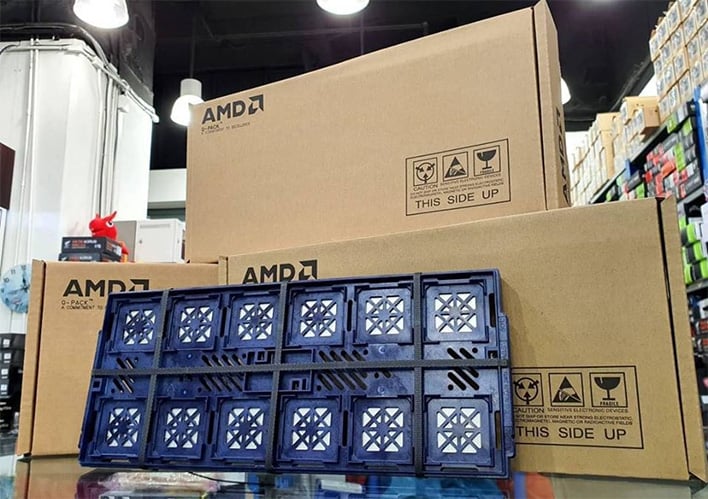 Hat tip to Hexus for spotting the social media post, which belongs to retailer Autonet Home Computer DIY of Thailand. It's not a retailer we have ever heard of before. However, here is what the site is charging for the available APUs...
The caveat is that browsing the site is rough. It is not loading very well, perhaps because it is getting hammered, or maybe the vendor went over its data cap from its domain host. There are some links, but no images—all of the pretty photos are found on the company's Facebook page.
It also looks like the vendor might only be selling these chips in bulk. Google translations are not always reliable, but the posting says, "For this lot, it is BULK PACK as shown in photo."
In any event, it's interesting to see these show up for sale to the public. It's not entirely clear when or if AMD will make its latest APUs more widely available for standalone purchases, rather than as part of a pre-built PC from its OEM partners.