The next round of Ryzen Embedded processors from AMD could be veritable powerhouses, if the latest rumored specifications pan out. Getting straight to the meat of the leak, it is suggested that AMD's upcoming Ryzen Embedded V3000 series will pair the company's mighty Zen 3 CPU architecture with its stout second generation Radeon DNA (RDNA 2) graphics.
That would potentially amount to quite a bit of power in an embedded package. What is also interesting is that according to the leak, the Zen 3 component is being built on a 6-nanometer manufacturing process, whereas existing Zen 3 parts leverage TSMC's 7nm node (like AMD's Ryzen 5000 series desktop processors for consumers). 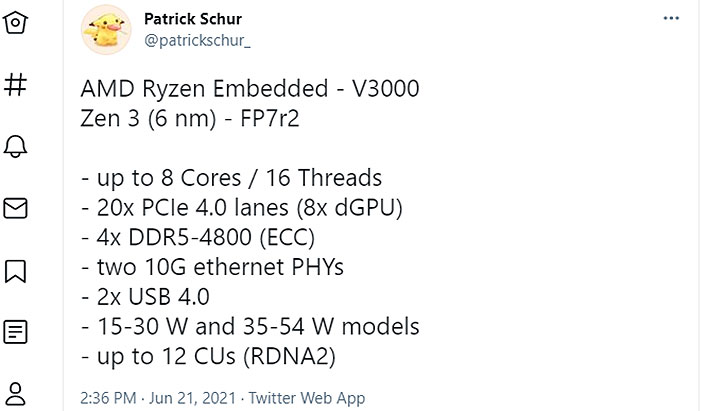 The leaked information comes courtesy of Patrick Schur, who seems plugged into AMD's inner dealings. According to what he supposedly knows, the Ryzen Embedded V3000 lineup will also boast support for next-generation DDR5 memory. What gives? Well, this essentially amounts to a Zen 3+ refresh, with the 6nm node and DDR5 memory support.
Assuming this and other recent leaks are true, AMD seems to be in the midst of a reshuffling effort. To that end, its upcoming Rembrandt APUs are also said to be based on Zen 3+ and built on a 6nm node. In addition, AMD recently touted a sort of Zen 3 refresh, with future parts debuting with stacked 3D vertical cache to bolster performance to a degree normally seen with a generational leap in architectures.
As for the Ryzen Embedded V3000 series, it's said these chips will be offered with up to 8 cores and 16 threads. There will be multiple models split between 15-30W and 35-54W designs. On the graphics side, we're looking at up to 12 compute units based on RDNA 2. Other features include 20 PCI Express 4.0 lanes and support for two DDR5-4800 modules with two channels apiece, up to two USB 4.0 ports, and two 10Gbps Ethernet ports.
It's not clear when AMD will unveil its Ryzen Embedded V3000 series. Given that the Ryzen Embedded V2000 series is barely more than half a year old, it could be early 2022 before we see the new lineup.