New AMD processors are just around the corner, and we cannot wait to get on hands with the new Zen 4 SKUs shown in August. In the meantime, though, we will have to settle for the plethora of leaks and snippets of information we can get our hands on, such as the latest leaked AMD Ryzen 9 7900X Geekbench scores, which appear to beat out the Intel Core i9-12900K scores.

Spotted early in the morning on September 16th, the Geekbench scores for an AMD Ryzen 9 7900X hit the Twitterverse, boasting a fairly impressive single thread score of 2167 and multi-thread score of 18,446. The system that produced these numbers included a Gigabyte X670E AORUS Master and a healthy 32GB of DDR5 RAM running Windows 11 Pro. 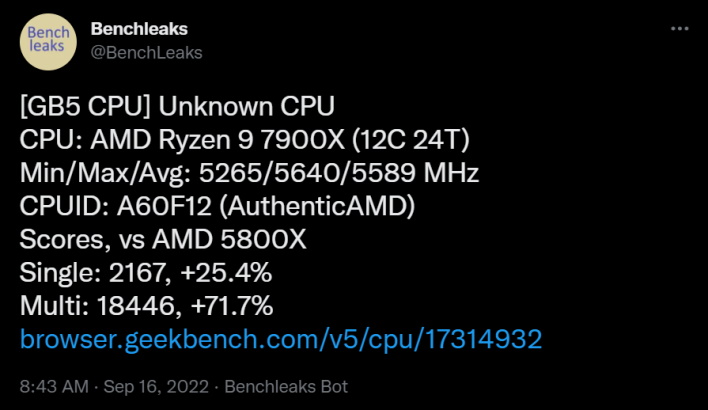 Putting the numbers side-by-side with the competition tells an interesting story, with AMD’s single-thread score taking the lead over both the Intel i9-12900K and the i9-12900KS. However, the 18,446 multi-thread score comes in slightly behind both processors according to our in-house testing as well as other similar Geekbench tests with similar components. Of course, this could just margin of error we are seeing, but we would need more leaks like this to be sure.  We would also like to note that the single-thread performance is incredibly close to that of the Intel Core i9-13900K and Ryzen 7 7950X, within a few points, from leaked Geekbench scores we saw last month. 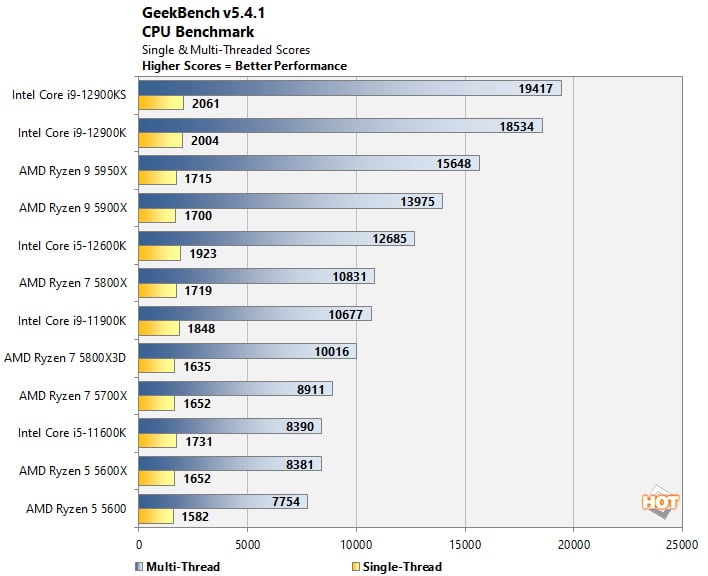 Even though there is much tweaking still to be done, overclocks to be had, and likely some more polishing to occur, seeing AMD and Intel battle it out this closely is fascinating to watch. Of course, the fronts will ebb and flow as time passes, so keep an eye on HotHardware, and let us know who you think will come out as the victor of this exciting CPU launch cycle.