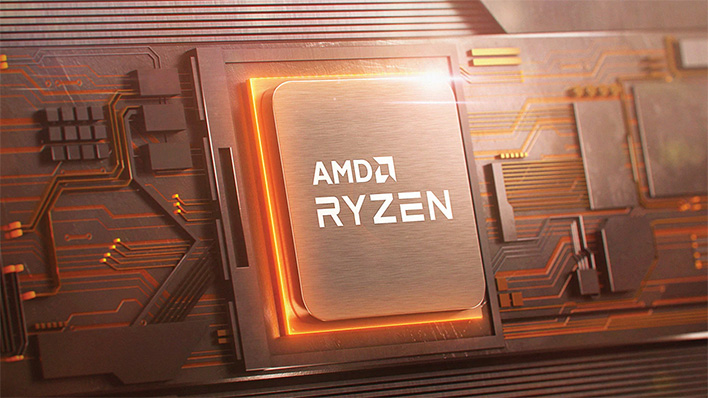 By my count, AMD has confirmed precisely 4,287 times that its Zen 3 processors are on track to launch this year, and that includes client processors (read: consumer processors). Okay, maybe not precisely that many times, but probably close to that number. In any event, as we wait for Zen 3's eventual arrival, new information has emerged about AMD's upcoming Ryzen 9 4950X CPU .
AMD has not announced any next-generation CPUs yet, mind you. However, Igor Wallossek from Igor's Lab has dug up an OPN (orderable part number) designation for the Ryzen 9 4950X, and with it comes a bit of revealing information. The OPN in question is 100-000000059-52_ 48/35 _ Y. Let's break that down, shall we?
The interesting parts are the final two sets of numbers: 48 and 35. These designate the boost and base clocks, respectively. As in, the Ryzen 9 4950X will have a 3.5GHz (35) base clock and a 4.8GHz (48) boost clock, assuming the OPN is real.
Of course, even if the OPN is real and accurate, it might not be indicative of the final specifications. That said, the clocks are different than a previous B0 stepping that Wallossek had reported on, which had a faster 3.7GHz base clock and slower 4.6GHz boost clock.
According to past leaks, the Ryzen 9 4950X will feature 16 cores and 32 threads of computing muscle. Those specs seem reasonable, considering the Ryzen 9 3950X it will end up replacing also wields 16 cores and 32 threads. For reference, the Ryzen 9 3950X runs at 3.5GHz to 4.7GHz, and has 16MB of L3 cache and 8MB of L2 cache.
It's a veritable powerhouse, particularly for multi-threaded applications. Likewise, the Ryzen 9 4950X will undoubtedly be a beastly chip as well, with the same number of cores and threads, and possibly faster clocks. And of course whatever architectural improvements Zen 3 brings to AMD's "Vermeer" lineup. We can hardly wait.