One of the beastliest mainstream desktop processors you can buy right now is AMD's Ryzen 9 3900X. Calling it a 'mainstream' part is strictly a technicality, because with 12 cores and 24 threads at its disposable, the Ryzen 9 3900X is one heck of a multi-threaded workhorse. As if the sheer number of cores and threads was not enough, however, an overclocker saw fit to douse the part in liquid nitrogen and crank the clock to 5.62GHz, en route to setting a wPrime world record.
Let's talk about the Ryzen 9 3900X for a moment. It's based on AMD's latest generation Zen 2 architecture, and is built on a 7-nanometer manufacturing process. At stock settings, it has a 3.8GHz base clock and 4.6GHz boost clock. It also boasts 64MB of L3 cache and 6MB of L2 cache (for a total of 70MB of what AMD calls Game cache).
The suggested retail price is $499, and for a period of time, it was hard to find the Ryzen 9 3900X selling for that amount—sellers were price gouging before supplies finally stabilized. That has been corrected, and you can currently find the Ryzen 9 3900X on Amazon for $495.99.

This may help confirm the accusation that zen 2 actually has higher IPC?https://t.co/BUOAmvqKQw

Now here's where things get fun. An overclocker from Australia who goes by Jordan.Hyde99 plopped a Ryzen 9 3900X into a Gigabyte X570 Aorus Extreme motherboard, poured some liquid nitrogen onto it, and then cranked the clockspeed to 5.625GHz. With the aggressive overclock in hand, he then proceeded to snatch the wPrime 1024m 12-core record from Intel's Core i9-7920X by completing the run in just 35.517 seconds. He also completed a 32M run in 1.797 seconds. 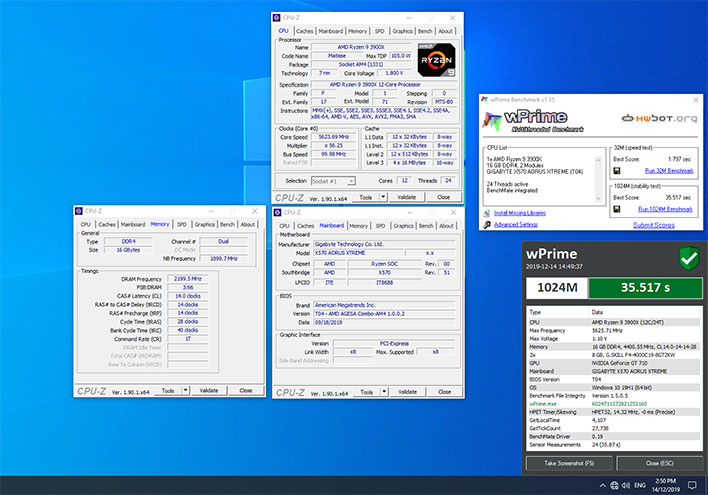 To achieve the 48 percent overclock on all 12 cores, Jordan had to push the voltage up to 1.8V. That's on the high side, folks. He also paired the CPU with a 16GB kit (2x8GB) of G.Skill DDR4 memory, in case anyone is curious.
Of course, these settings (clockspeed and voltage) are not feasible for everyday use, at least not until the day exotic cooling schemes become as standard as air and liquid cooling. However, it's fun to see what high-end processors are capable of when removing certain factors.
In addition, this particular overclock and subsequent benchmark record speaks to the strong IPC (instructions per clock) performance of the Zen 2 CPU architecture. At 5.625GHz, the Ryzen 9 3900X managed to edge out the Core i9-7920X in wPrime, while running nearly 6 percent slower. That's impressive.
Hat tip to Twitter user Shaun Fosmark for spotting this one.
Top/Thumbnail Image Source: Jordan.Hyde99 (via HWBot)