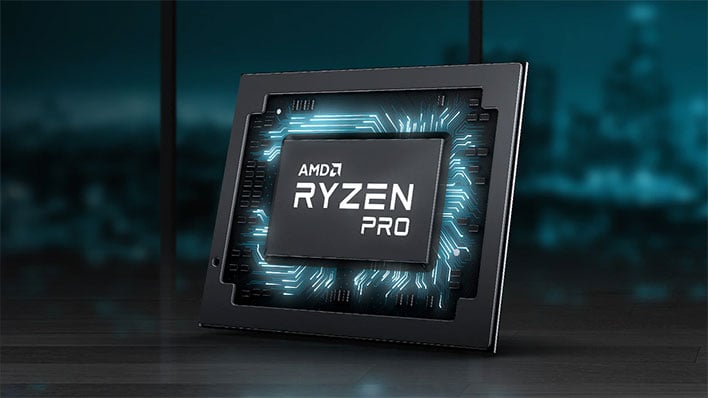 Towards the end of March, Lenovo bragged about being the first PC vendor to announce forthcoming laptop models outfitted with processors from AMD's Ryzen Pro 4000 mobile range, though the OEM stopped short of revealing specific SKUs. Be that as it may, a couple of leaked entries on 3DMark may hint at what's to come.
Credit goes to the usual prominent leakers, @_rogame and @TUM_APISAK, both of which posted screenshots of two new Ryzen Pro processors, including the Ryzen 7 Pro 4750U and Ryzen 5 Pro 4650U, both Radeon Graphics. Both entries also point to these chips being run inside an unnamed Lenovo laptop.
Here are the listings presented side-by-side... 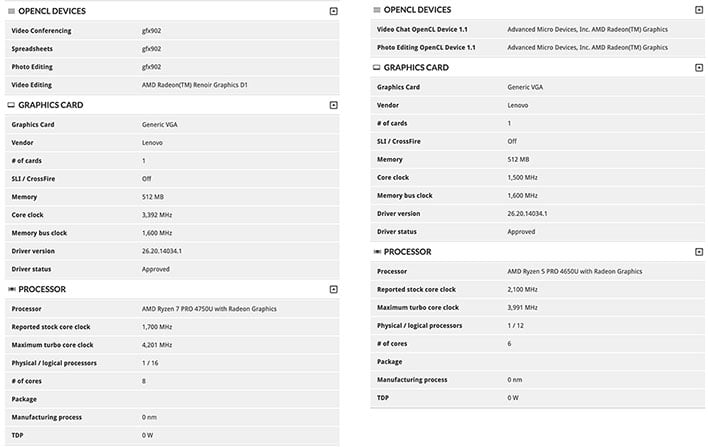 Click to Enlarge (Source: 3DMark via @_rogame and @TUM_APISAK)
The listing on the left highlights the Ryzen 7 Pro 4750U with Radeon Graphics. According to the database entry, it's rocking 8 cores and 16 threads with a 1.7GHz base clock and 4.2GHz base clock. 3DMark was unable to identify the TDP rating—it simply states 0W, which is obviously untrue (though that would be neat, wouldn't it?).
Those speeds are roughly on par with the 8-core/8-thread Ryzen 7 4700U (2GHz base clock, 4.1GHz boost clock) and 8-core/16-thread Ryzen 7 4800U (1.8GHz base clock, 4.2GHz boost clock). Pro models bring some additional business-oriented manageability and security features to the table that are not found on the non-Pro models.

Over the right, 3DMark highlights the Ryzen 5 Pro 4650U. It's shown as being a 6-core/12-thread processor with a 2.1GHz base clock and 4GHz boost clock. As for the onboard graphics, it's shown as running at 1.5GHz. Here again, 3DMark was unable to pull accurate TDP info. For the comparison, AMD's Ryzen 5 4600U is also a 6-core/12-thread CPU with the same 2.1GHz base clock and 4GHz boost clock.
It's not clear which exact Lenovo laptop model(s) we are looking at here. However, Lenovo did previously reveal that it will tap AMD's Ryzen Pro 4000 line as options for its ThinkPad T14s, ThinkPad T14, ThinkPad X13, ThinkPad L15, and ThinkPad L14 laptops. There are all due sometime "later in 2020" starting at $649 and up.
Things are about to get interesting in the laptop space. AMD's hardware partners are on the cusp of releasing models built around on its Ryzen 4000 series based on the company's Zen 2 CPU architecture (paired with Vega graphics), and rival Intel is getting ready to dish out higher-octane Comet Lake-H CPUs (it's already launched Comet Lake-U and Comet Lake-Y for thinner and lighter laptops).