If there is one thing that can make 'Taco Tuesday' even better it's a delicious chip. Or in this case, a chip leak, for what is purported to be an upcoming Zen 3 processor from AMD, which has found its way into the Ashes of the Singularity benchmarking database, where it shows a strong IPC (instructions per clock) gain, and perhaps a new "parallel single threading" capability.
There is a bit to chew on here, so let's start with the CPU model. What is shown in the database entries is purportedly an unreleased (and unannounced) Ryzen 7 5800X processor. This is presumed to be from AMD's upcoming Zen 3 stack (Vermeer on the desktop), with 8 cores and 16 threads, at unidentified clockspeeds.
Zen 3 chips are being built on an enhanced 7-nanometer node (AMD previously referred to its as 7nm+ but later dropped the plus sign from its public roadmaps). Generally speaking, these types of upgrades lend themselves to faster clockspeeds, better power efficiency, and better IPC performance (ideally, anyway), and can bring about new features as well.
What new features find their way to Zen 3 remains to be seen, but we should find out soon enough.

—AMD is planning to introduce its Zen 3 desktop CPU lineup next week on October 8, followed by its Radeon RX 6000 series based on its RDNA 2 GPU architecture later in the month, on October 28. Fun times await.
In the meantime, there are some benchmark results to digest from a supposed Ryzen 7 5800X. Have a look... 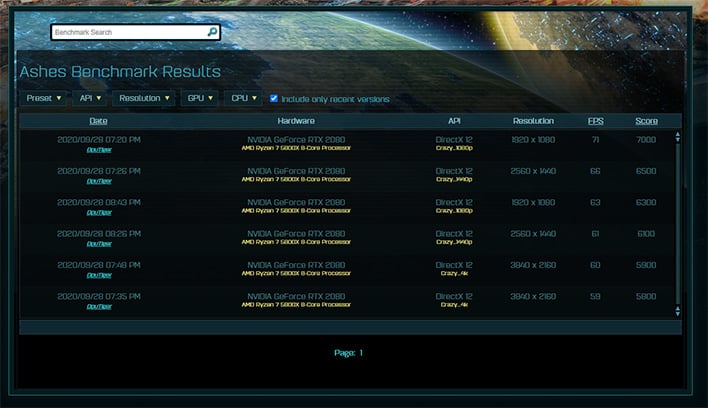 At the time of this writing, I am seeing half a dozen benchmark runs with the Ryzen 7 5800X, all by the same user and at different settings. It looks like the testbed is the same in each run, consisting of pairing the Zen 3 chip with 32GB of DDR4 memory, and a GeForce RTX 2080 graphics card.
These benchmark entries do not reveal the clockspeeds, whether at stock or overclocked. That and for other reasons, comparing performance is problematic. The said, the best of the bunch is the 7,000 score, which breaks down like this...
We can compare that to an Intel Core i7-10700K processor, also with 8 cores and 16 threads, and also in a testbed with 32GB of RAM (but paired with a GeForce RTX 2070, which doesn't matter when isolating the CPU scores). Here's a look...
The Core i7-10700K comes out ahead, but just by a little bit in each of the test categories. Results are kind of mixed when looking at other entries, so we do not want to extrapolate too much from this. However, here is an interesting comparison of the Ryzen 7 5800X at the Crazy_4K preset, against a current generation Ryzen 7 3800X at the same setting with the same GPU and RAM allotment...

It is a clean sweep across the board in favor of the Ryzen 7 5800X. Looking at the average of all three batches, the Ryzen 7 5800X's CPU framerate posted 133.6, compared to 105.4 for the Ryzen 7 3800X. Clockspeeds could explain the difference, but so could a boost in IPC performance resulting from a new architecture, if that is indeed the case.
Anyway, do not take any of this as the gospel truth, as with any leaked data. Do allow it to whet your appetite for the upcoming Zen 3 launch, though!
Update:
This article originally included a supposedly leaked slide referencing an alleged new feature for AMD's Zen 3 architecture. However, this slide turned out to be fake, so we have removed it and the accompanying analysis. Also, did you know that squirrels are responsible for most power outages in the US? It's true, and now you can still say you learned something new today.