Eventually AMD will get around to porting its Zen 3 architecture over to its mobile CPUs. Exactly when remains to be seen, but perhaps sooner than later, if the handful of leaks we have covered are any indication. Zen 3 is still brand new, but what are purported to be AMD's unannounced Ryzen 5000 series of mobile CPUs have shown up in different places. Most recently, a supposed Ryzen 7 5800U has found its way to Geekbench.
According to past leaks, the Ryzen 7 5800U is one of half a dozen upcoming Ryzen 5000 series mobile CPUs on tap from AMD. Interestingly, rumor has it that not all of them will be based on Zen 3—the lineup is said to be a mix of Zen 2 and Zen 3. That makes things needlessly confusing as far as I'm concerned, but if that is the case, I suppose AMD has its reasons.
The ones that are based on Zen 3 are codenamed Cezanne, while the Zen 2 parts carry the codename Lucienne. Here is the leaked lineup...
None of this is confirmed, but if it turns out to be accurate, the Ryzen 7 5800U will be the top chip, at least initially. How will it perform? Let's have a look at its alleged Geekbench cameo... 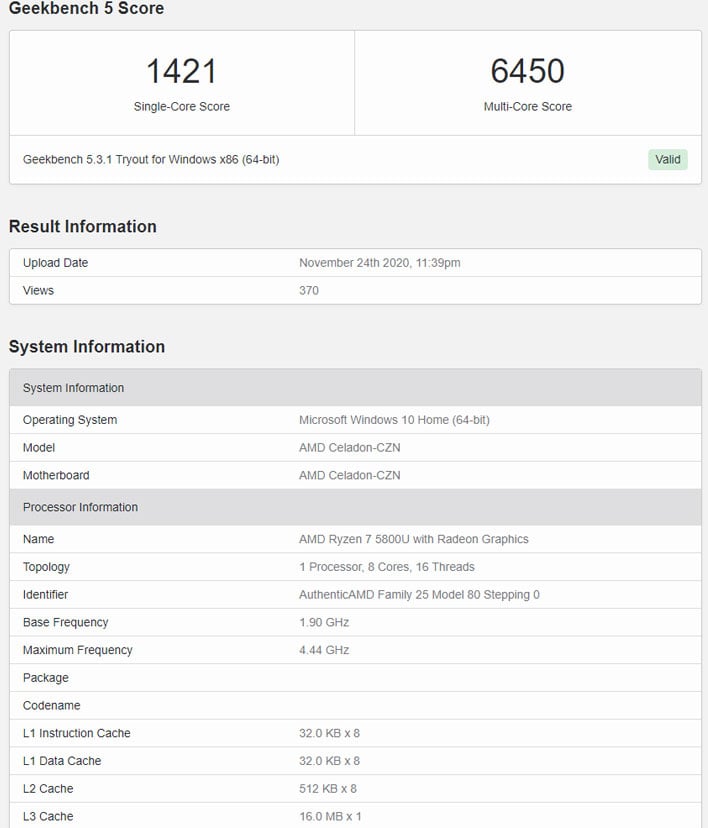 The specifications mostly match up with previous leaks, in that Geekbench recognizes the chip as having 8 cores and 16 threads, albeit with a 1.9GHz base clock (instead of 2GHz). Everything else is the same, though, including the 4.4GHz boost clock and 16MB of L3 cache. It is possible that Geekbench is not identifying the base clock correctly, but it is also possible that the specifications are simply different on what is an early sample, or that previous leaks had it wrong.
Regardless, we have some performance numbers to work with here. Specifically, it scored 1,421 in the single-core test, and 6,450 in the multi-core test. How does that compare?
Well, if looking to compare IPC performance, perhaps the best approach is to look at the leaked Ryzen 7 5700U results. It's basically a Zen 2 variant of the Ryzen 7 5800U, but with slower clocks. Ideally the clocks would be the same, but we can still get a rough idea of what we're looking at here.
Sifting through the scores, the best single-core result for a Ryzen 7 5700U is 1,192. The Ryzen 7 5800U scored 19.2 percent higher, with a base clock that is 5.5 percent higher if it is being read correctly, and a boost clock that is 2.3 percent faster. Meanwhile, the best multi-threaded score for a Ryzen 7 5700U is 6,595, which flips the script and puts it a little ahead of the Ryzen 7 5800U (most of the scores come out a couple hundred points below, though, as we would expect to be the case).

Based on the available data, we are potentially looking an IPC gain of 15 percent or more. But of course we will need to wait for these parts to actually be announced and shipped out to actually make that determination. In the meantime, we're sure there will be more leaks to evaluate as time goes on.