One of AMD's upcoming mobile CPUs based on its Zen 3 architecture has made a benchmark appearance at Geekbench, that being the unannounced Ryzen 7 5800H. According to past leaks, this is one of several mobile CPUs on tap from AMD, which will be split between Zen 3 (Cezanne) and Zen 2 (Lucienne) models, with this particular SKU aimed at higher performing laptops.
Up to this point, the majority of mobile CPU leaks have centered on AMD's lower power Ryzen 5000U series, and specifically the following models...
AMD has not announced or confirmed any of this, so keep that in mind, both in regards to whatever the final specifications end up being and the specific models that get announced.
In any event, rumor has it AMD will take a similar approach to its Ryzen 5000H series—some models will be based on Zen 3, and others will be built around its Zen 2 architecture (Renoir). The Ryzen 7 5800H is said to be the former. And according to the listing at Geekbench, it is an 8-core/16-thread processor with a 3.2GHz base clock and 16MB of L3 cache.
Have a look... 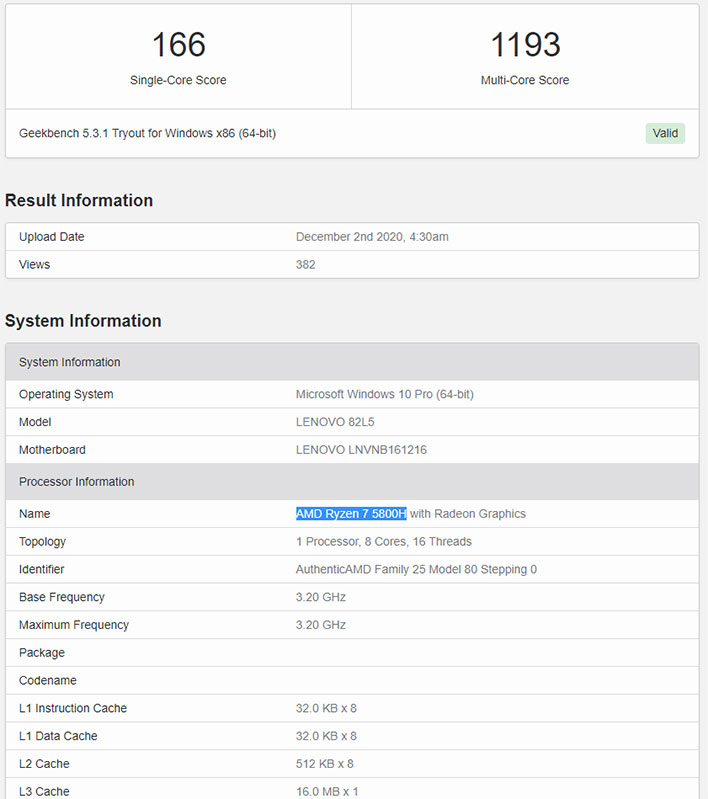 The listing does not reveal the boost clock, though we can it expect it to run north of 4GHz. And with regards to the L3 cache, it is a significant bump over the Ryzen 4000H series—for reference, the Ryzen 7 4800H is an 8-core/16-thread CPU with a 2.9GHz base clock, 4.2GHz boost clock, and 8MB of L3 cache.
As for the scores, well, they are pretty awful. One of the most recent Ryzen 7 4800H results has it scoring 1,145 in the single-core test and 6,950 in the multi-core test. So, what gives with the Ryzen 7 5800H doing so comparatively poorly? There are a couple of explanations.
For one, this is a likely an early engineering sample. Secondly, I did some digging and some sites are reporting the benchmark run being performed at just 500MHz. I'm not sure where that figure is coming from, but if that is the case, it would certainly explain why the scores are so low.
Regardless, mobile CPUs based on Zen 3 are coming, and they will undoubtedly perform better than this benchmark leak.