AMD has already shown the world the power of it 7nm Zen 3 architecture with the release of the Ryzen 5000 Series of desktop CPUs, and that winning formula will continue when the company unveils it Ryzen 5000 APUs sometime in 2021. However, things are going to get a bit complicated for customers looking to buy a system with a Ryzen 5000 APU, as AMD will be using a mixture of Zen 3- and Zen 2-based architectures.

As we saw last week, Acer already has an Aspire 5 A515 laptop lined up with one of these Zen 2-based "Lucienne" APUs processors on hand: the Ryzen 7 5700U. And now, we're getting our first taste of the Ryzen 7 5700U thanks to some leaked benchmarks. In this case, the Geekbench 5 result was discovered by hardware sleuth TUM_APISAK, who found a Ryzen 7 5700U lurking inside an unreleased Hewlett-Packard Pavilion 15-eh1xxx laptop. 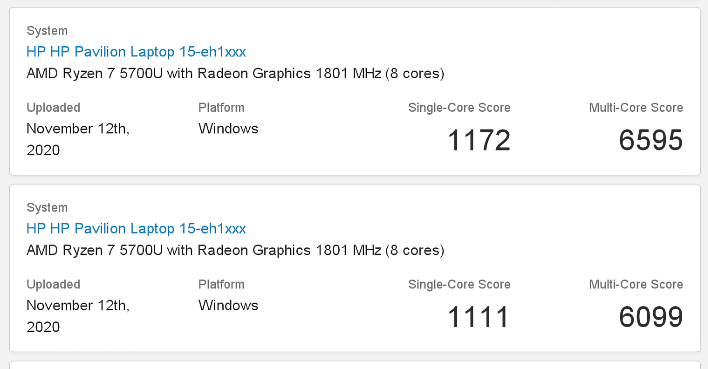 Those numbers put the Ryzen 7 5700U slightly ahead of the Ryzen 7 4800U, which is to be expected with the former's slightly higher boost clock. We'd expect to see some small gains in graphics performance as well given the 1.9GHz GPU clock versus 1.75GHz on the Ryzen 7 4800U.

With that being said, potential notebook (and desktop) shoppers are going to need to pay particularly close attention to what AMD Ryzen 5000 Series APU is listed in the specs sheet when purchasing a system. The chart above should give you a good idea of how to decipher Zen 3 APUs from Zen 2 APUs. While the latter should offer some slight performance improvements over their Ryzen 4000 counterparts, the former are where you'll want to latch on to for [likely] big boosts in performance, with a resultant price premium to go along with it.

We should learn more about both Zen 2- and Zen 3-based Ryzen 5000 APUs around CES 2021 in January, which will be held virtually due to COVID-19.