One of the final destinations for AMD's mighty Zen 3 architecture is in the desktop APU space. Otherwise known as Cezanne, these desktop CPUs based on Zen 3 with Radeon graphics underneath the same hood are coming (presumably soon). While we wait, the upcoming Ryzen 7 5700G has seemingly made a benchmark cameo, after having been overclocked to 4.8GHz.
This is not the first sighting of a Ryzen 7 5700G in the wild. The unreleased and unannounced chip made its benchmark debut in January, achieving a single-core score of 1,304 and a multi-core score of 8,717 in Geekbench 5, operating at stock clocks (3.8GHz base, 4.4GHz max boost).
Then a month later, a Ryzen 7 5700G engineering sample popped up on eBay, with OPN code 100-000000263-30. According to the eBay listing, it is an 8-core/16-thread APU with a 3.8GHz base clock and 4.45GHz max boost clock. The seller claimed the chip can overclock to 4.6GHz at 1.3V, and 4.7GHz at 1.425V if paired with a high-end motherboard and depending upon "your skills." 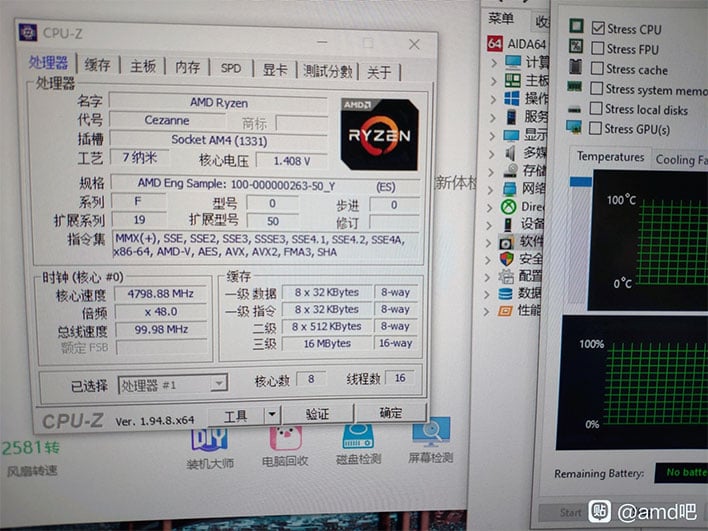 As for this latest leak, a user posted low-quality photos of screenshots of what they claim is a Ryzen 7 5800G, with OPN code 100-000000263-50. This is probably not a Ryzen 7 5800G, though, and more likely a later revision of the Ryzen 7 5700G engineering sample. One of the photos (above) shows a CPU-Z screenie, which reveals the 4.8GHz overclock.
The user was able to bump the frequency up to 4.8GHz at 1.4V, so in essence the presumed later-revision ES chip is able to overclock higher at less voltage than the previous revision. Good stuff, assuming the information is accurate/legit. 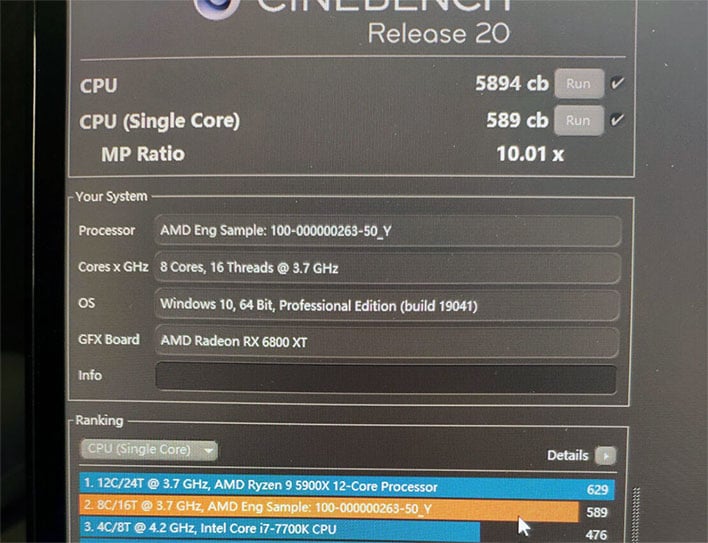 The user benchmarked the overclocked chip in Cinebench R20, achieving a single-core score of 589 and a multi-core score of 5,894. As a point of reference, a 12-core/24-thread Ryzen 9 5900X scores 629 in the single-core test. The Ryzen 7 5700G is within striking distance, albeit at a 4.8GHz overclock.
Looking a CPU-Monkey's collection of scores, the Ryzen 7 4700G scores 500 in Cinebench R20's single-threaded testing. So with the overclock in place, the Ryzen 7 5700G is nearly 26 percent faster in this particular benchmark, based on this leak. More good stuff.
Pricing will play a big role in how popular AMD's upcoming APUs end up being. But as far as the benchmarks and overclocking capabilities goes, there are encouraging signs leading up to the launch.