AMD might be getting ready to introduce at least two refreshed Ryzen desktop processors based on its current generation Zen 3 CPU architecture, otherwise known as Vermeer. A couple of supposed new model numbers (also known as the OPN) have emerged, one of which hints at a potential Ryzen 9 5950XT and the other one a likely Ryzen 5 5600XT part.
Somehow or another, DevOps engineer and prominent leaker Patrick Schur caught wind of the new B2 steppings, and posted the details to Twitter. 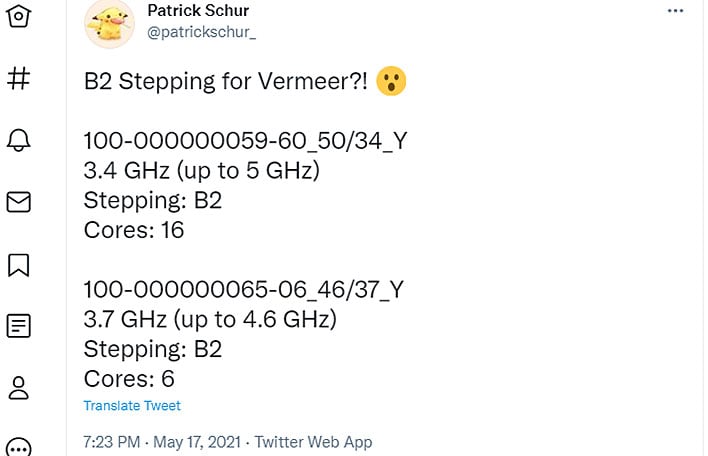 Part number 100-000000059-60_50/34_Y is a 16-core/32-thread processor with a 3.4GHz base clock, just like AMD's flagship Ryzen 9 5950X. However, the boost clock is listed at 5GHz instead of 4.9GHz. Should those specifications be correct and AMD is does indeed launch a refreshed Ryzen 9 5950XT with a 100MHz higher top speed than the regular "X" part, it will mark the first time AMD has taken Zen to 5GHz.
Granted, a 100MHz faster boost clock isn't going to light the computing world on fire. But cracking 5GHz from the factory would be a mental milestone. AMD has gotten there before, namely with its FX-9590, but ramping to 5GHz on Zen 3 is a much more enticing proposition than hitting that speed with an 8-core/16-thread Piledriver CPU.
The other B2 stepping listed is part number 100-000000065-06_46/37_Y, which is a 6-core/12-thread processor with a 3.7GHz base clock and 4.6GHz max boost clock. Sound familiar? It should—those specifications are identical to the Ryzen 5 5600X. So what gives?
That's a good question. Releasing a Ryzen 5 5600XT with the same speeds as the Ryzen 5 5600X would be odd, though perhaps AMD was able to make changes elsewhere. For example, maybe the XT part would have a lower TPD. AMD could also choose to bundle it with an upgraded cooler (the 5600X comes with the Wraith Stealth).
Alternatively, AMD might simply be replacing its X models with newer steppings that will not carry the XT designation. Whatever the case might be, these appear different than the rumored Zen 3+ refresh, as Schur hints that these are newer Vermeer parts, and not Warhol.