Over the weekend, we reported on a rather intriguing story about alleged failure rates with AMD's new Ryzen 5000 family of Zen 3 desktop processors. Ryzen 5000 processors are still relatively hard to come by at MSRP, so any news of potentially defective chips floating around was of course concerning.

PowerGPU alleged in a tweet that it was seeing some alarmingly high defect rates with Ryzen 5000 processors, particularly with the Ryzen 9 5900X and the Ryzen 9 5950X. In the case of the former, the PC builder alleged that 4 units were dead on arrival (DOA) out of 50 received, while it received 8 DOA out of 50 for the latter, which is AMD's current flagship Ryzen processor.

The outfit also indicated in a follow-up tweet that, "Every week it's at least 3-5 boards DOA from B550 to X570's." Is PowerGPU simply having bad luck, or was there really a problem going on with AMD hardware? An answer to that question got even cloudier when PowerGPU deleted its initial tweet pointing to its failure rates. AMD apparently got in direct contact with PowerGPU, after which it posted, "We just had a chat with AMD. We are going to work together testing out some CPUs and motherboards."

So, did PowerGPU send everyone on a wild goose chase with its findings? Well, the folks at PCWorld decided to dig deeper and came away with some interesting results. The publication’s Executive Editor Gordon Mah Ung first got a statement from AMD, which read, “AMD is looking into a claim by a custom PC builder regarding higher-than-expected failure rates they are experiencing with Ryzen 5000 series desktop processors. We are unaware of any similar issues at this time.” 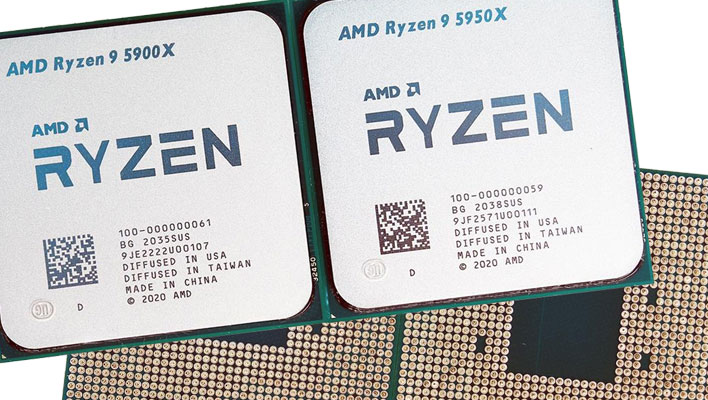 That sounds like a statement you would expect from AMD, but what about other vendors out there that have access to large quantities of Ryzen 5000 processors? PCWorld reached out to three different vendors (which wished to remain anonymous) to get their experiences with Ryzen 5000 RMAs. Two of the three vendors reported that they hadn't seen anything alarming with regards to RMAs.

The third vendor, however, revealed that they were seeing failure rates of 2.9 percent with the Ryzen 5000 series and right at 3 percent with the Ryzen 3000 series. The failure rate for both the Ryzen 5000 and Ryzen 3000 processors were roughly three times what they witnessed with Intel's 9th generation Core processors and about 2.5x greater than the 10th generation Core processors. However, the vendor added two caveats: 1) it sells way more Intel CPUs than it does AMD CPUs, and 2) it performs more extensive testing that involves torture testing CPUs with fully loaded memory slots. In addition, we should note that the processors weren't dead (as PowerGPU reported); they just couldn't pass the vendor's requirements for memory load outs.

At this point it's looking as though PowerGPU is indeed an outlier with its DOA claims, so it will be interesting to see if the company posts a further update after it talks with AMD and performs further analysis into what's potentially going awry with its setup.