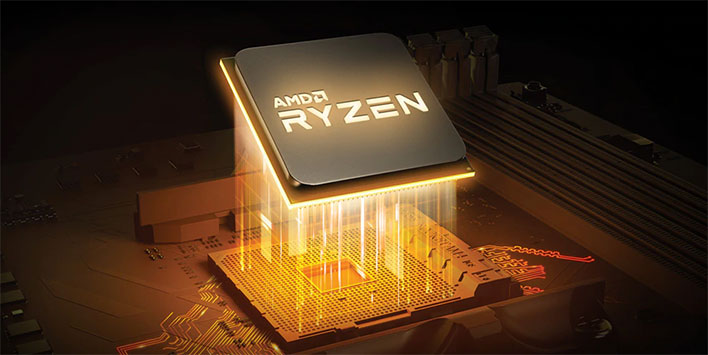 It stands to reason that at some point, AMD will introduce a new round of desktop processors based on its Zen 2 CPU architecture, with onboard Radeon graphics. Essentially an APU (accelerated processing unit), even though AMD does not use that term these days. Perhaps one of those upcoming chips, the Ryzen 7 4700G, has made a cameo in a benchmark leak.
Before we get to that, let's talk the Zen 2 lineup. There are few categories. On the desktop, they include the Ryzen 3000 "Matisse" series (regular and Pro variants) and Ryzen Threadripper 3000 "Castle Peak" series. For servers, there is the EPYC 7000 "Rome" series. And on mobile, AMD recently introduced its Ryzen 4000 "Renoir" CPUs.
Desktop APUs are the final destination for Zen 2 (presumably), and there have been various leaks purporting to showcase the upcoming parts. That's what we have here. Twitter user @_rogame spotted a supposed Ryzen 7 4700G with Radeon graphics at the Ashes of the Singularity (AOTS) benchmark database. Have a look...

Source: Ashes of the Singularity via @_rogame

According to the database entry, the Ryzen 7 4700G features 8 cores and 16 threads. There is no indication of the graphics makeup or any other specifications, though a previous Renoir desktop leak suggests the GPU portion could be running at 1,750MHz.

Interestingly, there is no Ryzen 3000 mobile "Picasso" series equivalent, as that lineup tops out with the Ryzen 5 3400G, a 4-core/8-thread chip clocked at 3.7GHz to 4.2GHz. On the graphics side, the Ryzen 5 3400G sports 11 compute units (CUs) clocked at 1,400MHz (Radeon RX Vega 11).
@_rogame reckons the Ryzen 7 4700G "most likely" has 8 CUs. Whether the listing is real or not, however, is the big question. As pointed out by Videocardz, a recent 'leak' of this same supposed processor at UserBenchmark turned out to be a spoofed entry.

To anyone looking at the 4700G benchmark on Userbenchmark. ITS FAKE. I was messing around with regedit, please dont believe it.

"To anyone looking at the 4700G benchmark on UserBenchmark, IT'S FAKE. I was messing around with RegEdit, please don't believe it. For anyone curious: it's an R7 3700X," Belly Jelly wrote on Twitter.
As always, take leaks and rumors with a heavy dose of skepticism. A Ryzen 7 4700G would certainly be an interesting chip, but whether it's in the cards or not, that remains to be seen.