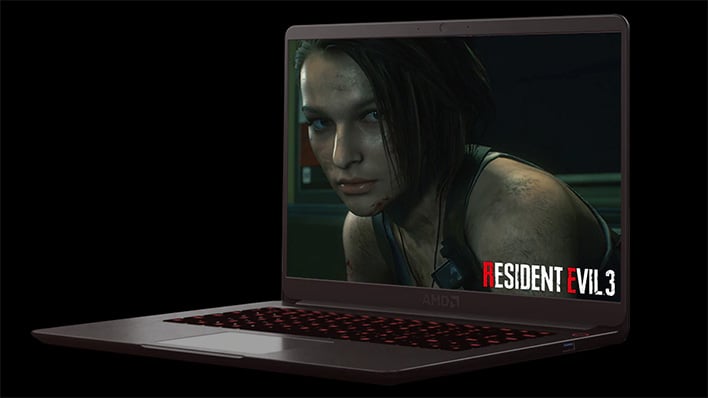 AMD has been on the offensive in its assault against Intel's dominate market share, and it is not focusing on a single battleground, either. Servers? Yep. Consumer desktops? You betcha. Gaming laptops? There too, though AMD seems to have missed a small opportunity for bragging rights and, in some cases, potentially better performance, as an internal block diagram reveals.
Let's start with what AMD has done. AMD has made a serious run at the performance laptop segment with its Ryzen 4000 H-series of mobile processors. The allure for consumers is the pairing of AMD's excellent Zen 2 architecture with powerful discrete GPUs, effectively delivering a desktop-class experience in a laptop form factor.
So far, Ryzen 4000H laptops have only slowly trickled into the marketplace. More are coming, but will they sport higher end graphics chips than what is available on some of the earlier models? Like a GeForce RTX 2080? We'll have to wait and see.
As it pertains to that, Igor Wallossek at Igor's Lab got his hands on a block diagram that shows an interesting (though not unique) restriction. Have a look... 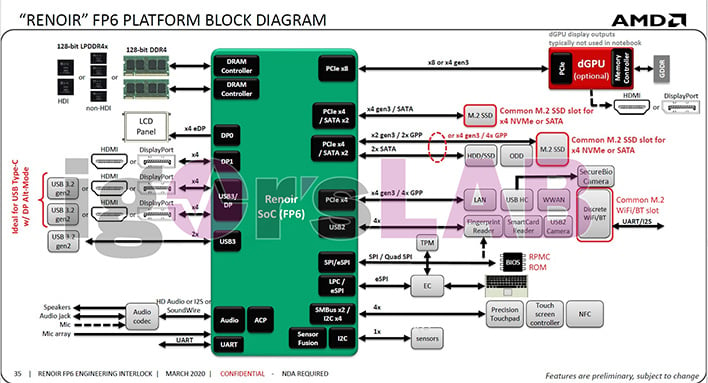 Kindly direct your attention to the upper-right corner where the dGPU is listed, and follow the arrow on the left side. For graphics, AMD has locked its mobile Renoir chips to PCI Express 3.0 at x8 or x16. Laptop vendors wanting to dedicate 16 lanes to a discrete graphics chip are unable to do that, so the full potential of higher end GPUs effectively goes untapped.
Now let's be clear here—this is not unique to AMD. The same is true of Intel's current mobile processors. It seems to be a decision based on power savings, as desktop parts are fully capable of tapping 16 lanes for graphics. So, we do not want to make a mountain out of a mole hill.
At the same time, this was a potential opportunity to flex in front of Intel. Instead, it could be the other way around if Tiger Lake delivers x16 support for discrete graphics.
Does it really matter, though? Well, for lower and and mid-range GPUs, not so much. PCIe 3.0 at x8 still offers enough bandwidth. Still, it does handicap performance to some extent. As spotted Videocardz, the folks at TechPowerUp performed a bunch of gaming benchmarks with a GeForce RTX 2080 Ti with different lane configurations.
"The RTX 2080 Ti is finally able to overwhelm PCIe gen 3.0 x8, posting a small but tangible 2–3 percent performance gain when going from gen 3.0 x8 to gen 3.0 x16, across resolutions," the site wrote.
That's not a whole lot, but the gap is a little bigger when comparing to x4. To put it into perspective, the site also correctly notes that GPU makers sometimes charge big premiums for factory overclocks that amount to the same type of performance gain (single digits).
Bear in mind this does not mean you should avoid buying a Ryzen 4000H laptop, or any current generation gaming laptop, if you are in the market for one. We also doubt this is why there are not any Ryzen 4000H laptops with discrete GPUs higher than a GeForce RTX 2060 right now. Nonetheless, it's interesting.