As we highlighted in our Radeon RX 6900 XT review, AMD's flagship graphics card is worthy of the designation, coming within striking distance of NVIDIA's GeForce RTX 3090 in traditional rasterization (the gap widens in ray-traced gaming) at a lower MSRP. So it would be quite remarkable if, as some alleged specifications allude to, AMD's next-generation Radeon RX 7600 XT could perform equally well, or perhaps even be better.
That's especially a tantalizing proposition considering the current landscape—GPUs are in such short supply that many PC gamers aren't even able to upgrade this round. If the shortage eases up next year, then next-gen RDNA 3 (AMD) and Ada Lovelace (NVIDIA) would conceivably be easier to obtain. And for those who weren't able to upgrade this round, a Radeon RX 7600 XT that delivers performance in the neighborhood of a Radeon RX 6900 XT for presumably a fraction of the price would be a nice consolation prize for having to sit this round on the sideline.
So what is this rumor all about, anyway? Twitter user @wild_cracks spotted an interesting change to the Twitter bio of @greymon55, who is an emerging leaker... 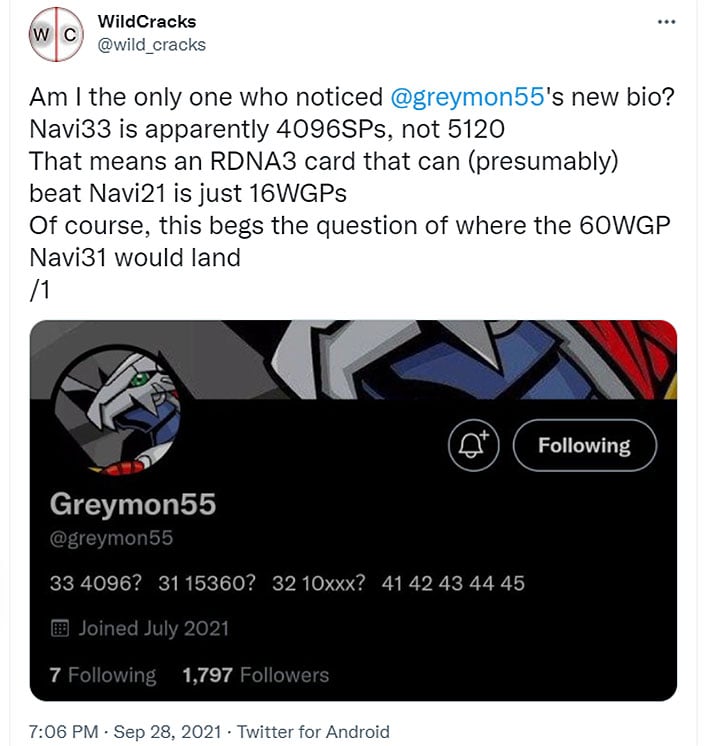 Those designations no longer appear in @greymon55's bio, but fortunately the specs were captured in a screen grab, as shown above. And what it shows is Navi 33 having 4,096 stream processors. This is actually a downgrade from previously leaked specs, which suggested it would arrive with 5,120 stream processors.
Let's piece this together, shall we? It's said that Navi 33 will go with a more traditional monolithic approach rather than a multi-chip module (MCM) design, built on a 6-nanometer manufacturing process. A previous leak pointed to there being a pair of shader engines, each of which contains two shader arrays comprised of five WGPs (workgroup processors). So that would be a total of 20 WGPs and 5,120 stream processors.

Now we're looking at 16 WGPs, with perhaps one WGP being disabled within each shader array (so now it's 4x4 instead of 5x4), and 4,096 stream processors. And there's this...
"N33 [Navi 33] was designed to be better than the 6900 XT, and even if it didn't meet its design goal, its performance was still around [a] 6900 XT," @greymon55 previously said.
Assuming the design goals are the same (and are accurate to begin with), AMD may feel that the Radeon RX 7600 XT with fewer stream processors can get the job done. And combined with 256MB of Infinity Cache, as previously rumored, and whatever IPC gains RDNA 3 introduce, it is at least conceivable that it could be a massive upgrade.
I'm a little skeptical of the claim because the core reduction is not insignificant, and we're probably looking at a narrower bus width (128-bit versus 256-bit)., but I won't rule it out, either. At the very least, it will be a huge upgrade over the Radeon RX 6600 XT, which features 2,304 stream processors—as configured, the Radeon RX 7600 XT would likely be around twice as fast, if not more so.
Of course, it's all moot if these cards end up being out of stock all the time. So here's hoping for better times ahead.