AMD is saving its really big gun for a next December launch, with the Radeon RX 6900 XT scheduled to land at retail on December 8. Technically, the Radeon RX 6800 XT and Radeon RX 6800 are both out, having launched to retail on November, though finding one in stock is an exercise in futility. That is a different discussion, though. One thing that is interesting about the upcoming Radeon RX 6900 XT is a leak suggesting it will be capable of overclocking higher than its siblings.
As the flagship GPU in AMD's second generation Radeon RDNA lineup (RDNA 2), the Radeon RX 6900 XT is configured with 80 compute units (CUs) and 5,120 shading cores, a 2,015MHz base game clock, up to a 2,250MHz boost clock, and 16GB of GDDR6 memory on a 256-bit bus, resulting in 512GB/s of memory bandwidth.
It is a beastly card for sure, and we already know from our Radeon RX 6800 XT and Radeon RX 6800 review that RDNA 2 is a capable graphics architecture. But what we did not know is that it might be able to hit a staggering 3GHz.
So says leaker and Twitter user Patrick Schur, who apparently got his mitts on a reference BIOS file and posted a couple of screenshots. Have a look... 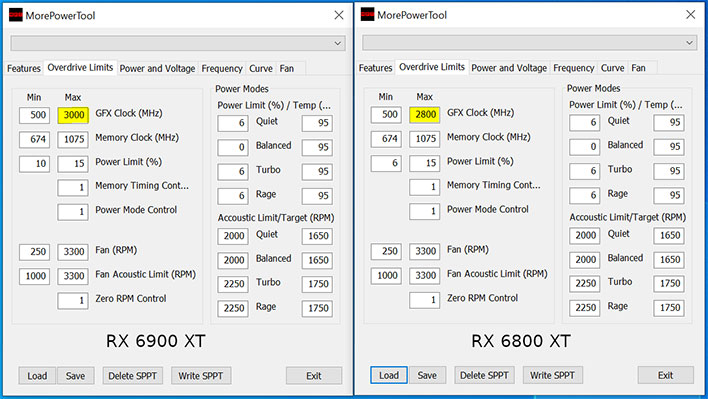 Whereas the Radeon RX 6800 XT BIOS shows it can potentially clock to 2.8GHz with some serious overclocking, the supposed Radeon RX 6900 XT indicates it can go 200MHz further, in the right hands of course. Part of the reason, potentially, is that the power limit seems to have been raised from 6-15 percent, to 10-15 percent. So that is a 4 percent jump on the minimum power limit side.
Looking over the rest of the side-by-side comparison, we see the fan profiles are the same. So what does this mean? Well, hardcore overclockers who push their hardware to the limit using liquid nitrogen (LN2) could have some additional headroom to play with, assuming this information is accurate.
Some overclockers have already run into the clockspeed ceiling on the Radeon RX 6800 XT using LN2 and have managed to set some 3DMark benchmark records. It looks like those records will not stand, though, once they get their hands on the Radeon RX 6900 XT and push things even further.
This also presents an interesting showdown between AMD's flagship card an NVIDIA's flagship champ, the GeForce RTX 3090. Neither of these are for the average user, naturally, and the same goes for extreme overclocks. But for those us on the outside looking in, it is going to be a fun battle to watch.