The AMD Radeon RX 6800 XT is here to give NVIDIA a run for its money in the high-end consumer graphics card market, and if that weren’t enough, people are doing some extreme overclocking with the card. In the HWBOT extreme overclocking league, TecLabs’s Takukou smashed the top single GPU 3D Mark Fire Strike score by over 1000 marks. He did this by overclocking his RX 6800 XT to a whopping 2.8GHz and chilling it down with some liquid nitrogen, or LN2 for the overclockers among us.

3D Mark’s Fire Strike test is a staple when it comes to benchmarking overclocks and showing off what you can do with hardware. Casual and competitive overclockers alike use it as the gold standard for checking and publishing their numbers. At present, the number one person on the leaderboard is SAFEDISK with an ASUS GeForce RTX 3090 and 47,725 marks, but that could change soon.

On the leaderboard just below SAFEDISK sits TecLab_Takukou with 47,044 marks from his AMD RX 6800 XT clocked at 2.75GHz. That clearly was not enough, though, as that speed did not net the top spot. While there is yet to be a validated Fire Strike score, TecLab_Takukou posted a picture to the HWBOT forums that should make SAFEDISK squirm: 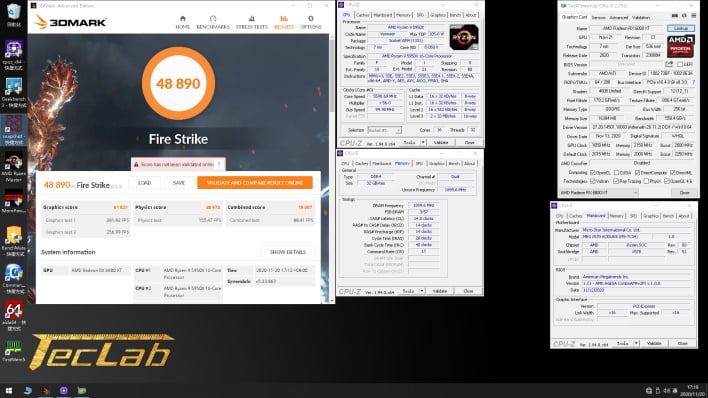 This picture shows the score of 48,890 marks at a GPU boost clock of a ridiculous 2.8GHz. TecLab_Takukou is clearly out for the throne with AMD hardware, and he may well have it soon. If he can maintain a stable overclock and get a score like that validated, the top spot will be his with ease.

We will have to see if he gets the top spot in the coming days, but evidence of a 2.8GHz overclock with the Radeon RX 6800 XT is absurd no matter what. That is roughly 600MHz above the default boost clock, so the card is being milked for all it is worth, and that is insane. We will keep our eyes peeled on the leaderboard for the next little while, so stay tuned to HotHardware for any overclocking updates.