Yesterday I wrote about some leaked benchmark results at the Ashes of the Singularity (AOTS) database, purporting to be obtained from a Radeon RX 6800 XT. Now a day later, there are more RDNA 2 benchmarks to absorb, this time from the model that is one step below—the Radeon RX 6800 (non-XT), from the same AOTS database.
We'll get to the benchmark data in just a moment, but as with before, let us first tour the pertinent specifications. The Radeon RX 6800 is the lowest tier version of RDNA 2 that AMD has announced so far, but it is not a low end card. It is armed with 60 compute units and 16GB of GDDR6 memory, and has a 1,815MHz game clock and 2,105MHz boost clock. The card also wields 128MB of Infinity cache.
Infinity cache is a sort of secret sauce in AMD's recipe for improved performance. This pool cache can, according to AMD, more than double the memory bandwidth when used alongside a 256-bit GDDR6 memory interface, yielding better performance and improve the bandwidth per watt.
Specifications out of the way, let's shift over to the leaked benchmark results (not run by us) that are publicly visible. There are two sets—one obtained at the Crazy 4K preset and another obtained at the Crazy 1080p preset. Both were run in a system equipped with an Intel Core i7-8700K processor and 32GB of RAM.
At the Crazy 4K preset, the card scored 7,800, and at the Crazy 1080p preset it scored 9,500. Those figures are pretty useless without comparison data, so let's have a look at that as well, starting with Crazy 4K results... 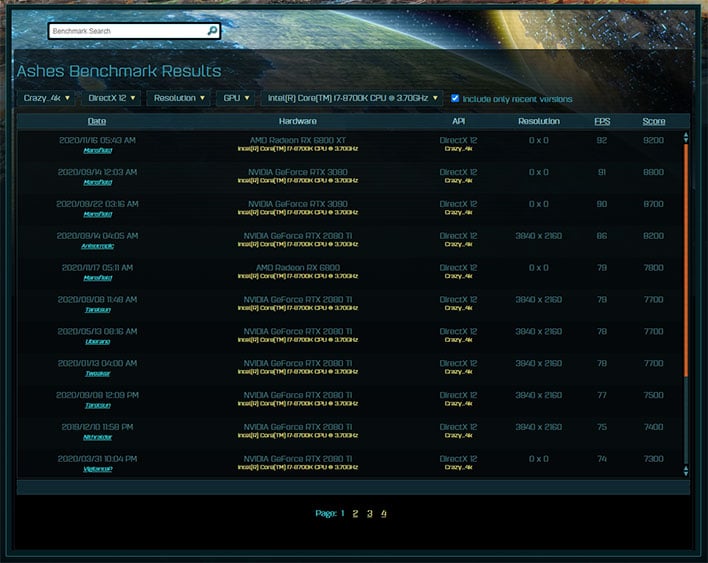 Looking at the collection of scores, the Radeon RX 6800 scores roughly on par with a GeForce RTX 2080 Ti, edging out most of the entries except for one. There is no way of telling which ones might have been overclocked, and of course things like driver versions can play a roll in performance. But at least we have something to look at.
Compared to the leaked Radeon RX 6800 XT score, which might be the most relevant (assuming it was obtained by the same user with the same settings and accompanying hardware), the non-XT model is around 15.2 percent slower. And compared to the GeForce RTX 3080 (which inexplicably ranks higher than a GeForce RTX 3090), it is around 4.3 percent slower.
Now let's look at the Crazy 1080p rankings... 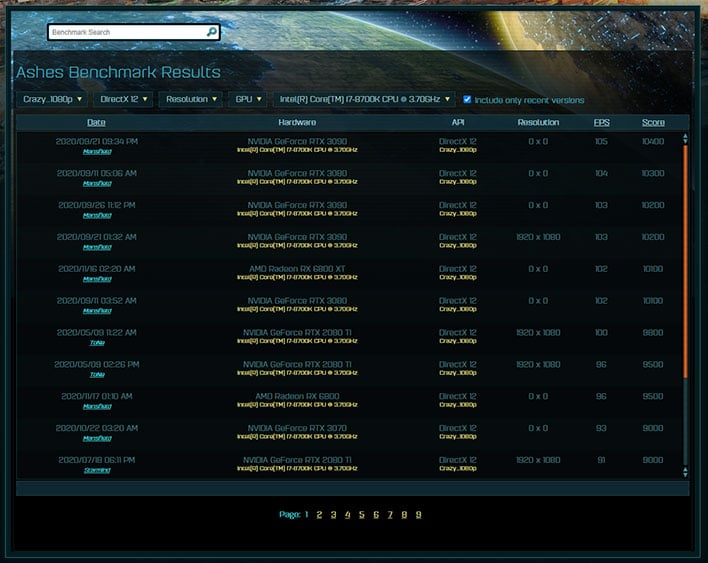 At this setting, we see the Radeon RX 6800 scoring around 5.6 percent higher than a GeForce RTX 3070, and nearly 6 percent slower than a Radeon RX 6800 XT. It also slots in underneath a couple of the higher GeForce RTX 2080 Ti cores, while beating some others.
As with before, we would caution not to read too much into these numbers and comparisons. Actual reviews with reliable benchmark figures are coming, and those will tell a better story of performance, and how the new cards compare across the board.
Stay tuned—both the Radeon RX 6800 XT and Radeon RX 6800 launch to retail tomorrow.