How fast exactly is AMD's Radeon RX 6800 XT graphics card, and how does it ultimately compare to NVIDIA's GeForce RTX 30 series? Official benchmark results and accompanying analysis will have to wait. In the meantime, we have a Radeon RX 6000 series unboxing you can check out, and some leaked benchmark results to digest.
First things first, let's talk specifications. The Radeon RX 6800 XT, as you probably know, is the second fastest RDNA 2 card AMD has announced so far. It is built around the company's Navi 21 XT GPU and features 72 compute units and 16GB of GDDR6 memory. It also has a 2,015MHz game clock and 2,250MHz boost clock, and 128MB of Infinity cache. What is that?
As AMD explains it, this pool of cache can more than double the memory bandwidth when leveraged alongside a 256-bit GDDR6 memory interface, to ultimately improve performance and bandwidth per watt—it feeds data to the graphics pipeline at a lower latency and with a much higher cache hit rate.
We'll have our own benchmarks in due time. While you wait, there some leaked scores (not from us) publicly visible at the Ashes of the Singularity (AOTS) database. It shows the Radeon RX 6800 XT paired with an Intel Core i7-8700K processor and 32GB of RAM, scoring 9,200 at the Crazy 4K preset.
Have a look...

By itself, the listing is not very meaningful. However, if we search the database for other entries at the same settings and paired with the same CPU, things get interesting. Here is what it comes up with... 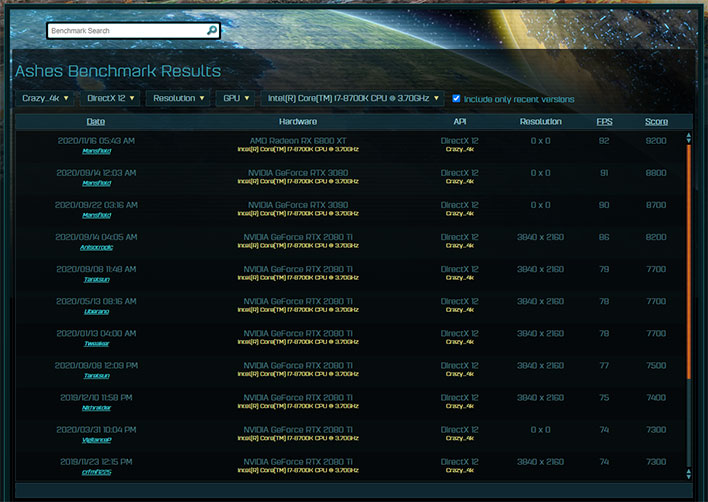 In any event, even just matching performance with NVIDIA's best is quite the achievement, considering that AMD's previous generation graphics cards have not threatened its rival for the performance crown. And if the Radeon RX 6800 XT proves to be even faster than a GeForce RTX 3090, it would be a giant, sparkling feather in AMD's cap. But we'll have to wait and see.

There is a separate entry that shows the card scoring 10,100 at the Crazy 1080p preset, which is very good, but not quite as impressive. That score puts the Radeon RX 6800 XT in a dead heat with the GeForce RTX 3080, and slightly behind the GeForce RTX 3090, which scores 10,400 with the same CPU. Bear in mind, however, that the Radeon RX 6800 XT is a $699 part, whereas the GeForce RTX 3090 costs $1,499.
It bears repeating that official analysis and post-embargo benchmarks are what truly matter. At the same time, these are some interesting numbers. We'll have to wait just a little longer to see if they hold up.