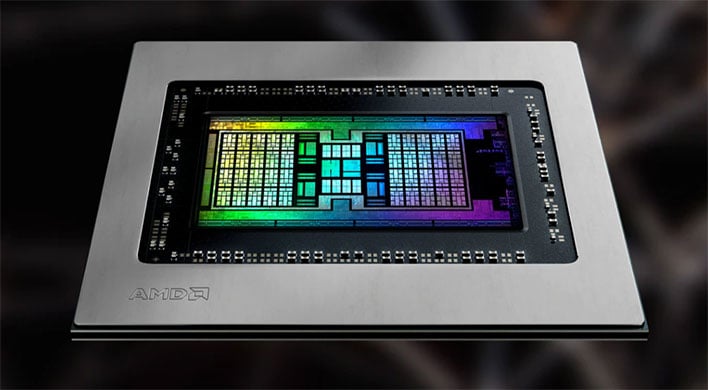 AMD has shown the desktop a lot of love with its Zen 3 CPUs (Ryzen 5000 series) and RDNA 2 GPUs (Radeon RX 6000 series), and both architectures will eventually find their way to mobile designs, as well. Earlier today we wrote about several Ryzen 5000H and Ryzen 5000U CPUs that were recently leaked. As a follow-up, let's talk about the latest Radeon RX 6000M leaks.
The Radeon RX 6000M series is what we presume AMD will call its mobile GPUs based on RDNA 2. We have not heard a whole about AMD's mobile GPU plans, but as time goes on, more unofficial information has materialized. As things stand, it looks like there will be at least three mobile GPUs based on AMD's latest graphics architecture: Navi 24, Navi 23, and Navi 22.
Much of the information comes by way of Patric Schur, a software engineer who, since joining Twitter in August of this year, has carved out a reputation for leaks. More recently, Schur has been on a bit of a Twitter blitz with information related to AMD's GPUs (both desktop and mobile).

Based on this latest leak, Navi 24 will come in two forms, including Navi 24 XM and Navi 24 XML, both for lower-end laptop graphics (entry-level sector). The post is light on specifications, but it does offer up some power consumption data. Specifically, it is claimed that Navi 24 XM will be configurable in 35W, 42.5W and 50W Total Graphics Power (TGP) ratings, while Navi 24 XML will be a 25W part.
This suggests Navi 24 will compete with lower end graphics solutions, as we already expect it to. Perhaps a Radeon RX 6300M and/or Radeon RX 6500M, if sticking with past naming conventions.
Patrick also shared some information about Navi 23, saying AMDi is targeting 65W, 80W, and 90W TGP designs, though those power targets are "subject to change." Interestingly, he says Tesla is wants to use Navi 23 for its cars.
Specs are light on Navi 23 as well, but according to Igor's Lab, we are likely looking at a 128-bit memory interface with up to eight GDDR6 modules, along with support for DirectX 12_1, Vulkan 1.1, Open GL 4.6, and OpenCL 2.2. He also reckons clockspeeds will top out at 2,350MHz, putting it well below Navi 21.
Finally, there is some chatter about Navi 22, which could end up powering the Radeon RX 6700M. This has a die size of 334.54mm2, and could potentially arrive with 40 compute units and 2,560 stream processors.
There will be two variants, according to Schur. One will have a 146W TGP and a 192-bit memory bus, just like its desktop counterpart, and the other will arrive in 135W, 110W, and 90W configurations, with a 160-bit bus. We shall see.