It is safe to assume AMD will be unveiling a new generation of mobile processors, in part because it would be silly (and very bad for business) if that did not happen. What we are waiting on, however, are the details. Official details will have to wait, but in lieu of an actual announcement, it appears an online retailer has spilled the beans on several of AMD's upcoming Ryzen 5000H an Ryzen 5000U processors for laptops.
The Ryzen 5000 series already exists on the desktop, and as we saw in our Ryzen 9 5950X and 5900X review, AMD's Zen 3 architecture dominates. And so we are eager to see Zen 3 ported over to mobile. There is a potential 'gotcha' however, that being a mix of Zen 2 and Zen 3 within AMD's upcoming Ryzen 5000H and Ryzen 5000U lineup.
Nothing has been confirmed, but multiple leaks suggest some parts will be based on Zen 3 and some will be based on Zen 2. I am not a fan of this approach, but I suppose AMD has its reasons (financial, I'm sure) for going this route, if it in fact does.
Architecture(s) aside, prominent leaker and Twitter user @momomo_us dug up a bunch of overseas listings for a handful of ASUS and Lenovo laptops outfitted with AMD's upcoming silicon. They appear to come from various sources, none of which we have been able to track down. However, if the listings are accurate, then they reveal some detailed specifications on a few of AMD's unannounced CPUs. 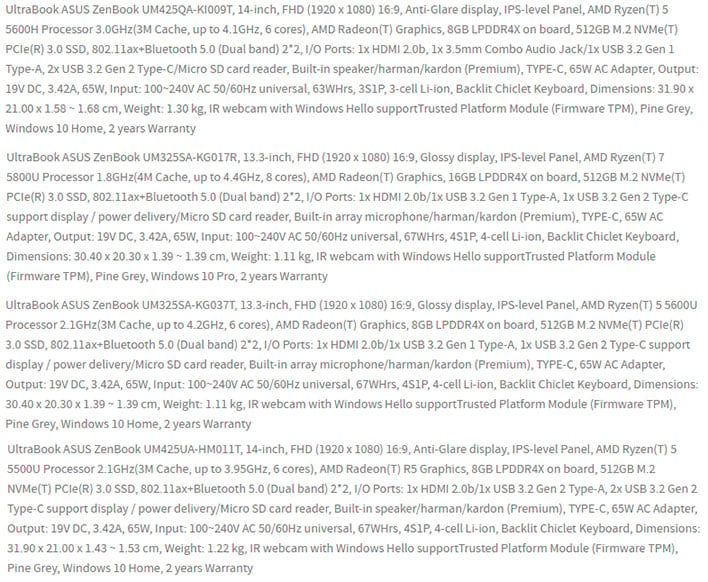 Shown above is one of the money shots, depicting a handful of ASUS ZenBook models outfitting with next-gen mobile CPUs from AMD. Combined with the other screenshots they shared (and past leaks), here is what we are looking at from the leaks for the Ryzen 5000U series...
Specific to today's leak, the Ryzen 7 5800U, Ryzen 5 5600U, and Ryzen 5 5500U all appear within the ZenBook listings. That is about as close to a confirmation of their existence and specifications as we can get, short of an official announcement. Meanwhile, today's leak suggest Lenovo will be injecting the Ryzen 7 5700U, Ryzen 5 5500U, Ryzen 5 5500U, and Ryzen 3 5300U into upcoming IdeaPad 5 and Flex 5 designs.

As for the Ryzen 5000H series for higher powered laptop designs, here is what we are looking at...

Out of those, the Ryzen 9 5900HS, Ryzen 7 5800H, and Ryzen 5 5600H are the ones that are the subject of today's leak. There are still some details that are not yet known, but we know more today than we did yesterday (seemingly, anyway).
Some potent gaming laptops are on the way as well. One of the leaked listings showcases an ASUS TUF Gaming laptop outfitted with a 17.3-inch IPS display with a 144Hz refresh rate, Ryzen 7 5800H CPU, GeForce RTX 3070 Max-Q GPU, 16GB of RAM, and a 512GB NVMe SSD. There is no mention of price or when it will be released, though.