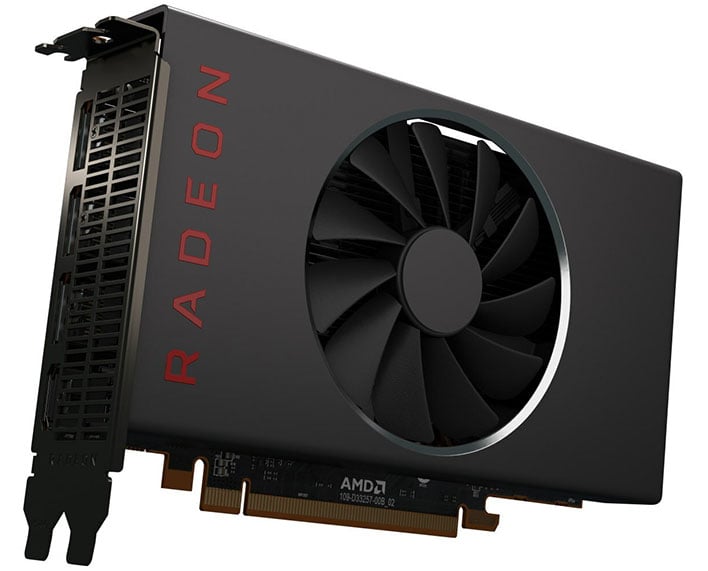 AMD is on the cusp of expanding its Navi-based graphics card lineup with the Radeon RX 5500 series, which it announced back in October of this year, and perhaps a Radeon RX 5600 series as well. Time will tell, but the latest scuttlebutt is that a Radeon RX 5500 XT model will launch very soon, possibly as early as next week.

Shown above is one of AMD's official slides from its press deck for the Radeon RX 5500 series. It's launching in both mobile and desktop form, with the latter having at least two different models, separated by the amount of memory (which will shuttle data over a 128-bit bus). Both desktop models will feature 22 compute units and 1,408 stream processors, with a 1,717MHz game clock and 1,845MHz boost clock.
The folks at Videocardz say they received information about the Radeon RX 5500 series that suggests both the 4GB and 8GB models with be "XT" parts. If that is the case, the regular Radeon RX 5500 could end up being reserved for OEM system builders. As with everything else, nothing has been actually confirmed by AMD yet.
There's also chatter of a Radeon RX 5600 XT graphics card. It's said this would feature 6GB of GDDR6 memory, possibly with a 192-bit memory bus. Not much else is known, though if the rumors are correct, it will launch early next year, possibly as early as January 2020.
When these cards do come out, it will be interesting to see how they stack up against NVIDIA's GeForce GTX 16 series based on Turing. NVIDIA recently rolled out a handful of faster Super models, so we could be in for a dogfight.