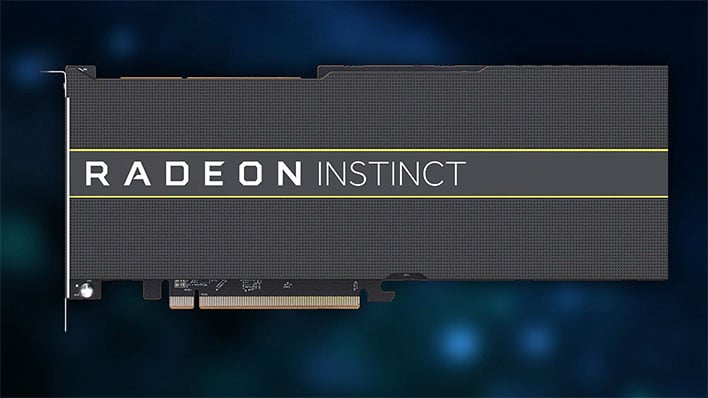 It looks as though AMD might be readying a new Radeon Instinct accelerator, one that would finally feature an Arcturus GPU. The latest leak is essentially a continuation of a rumor we have been hearing about since 2018, that being the impending launch of the Radeon Instinct MI100 accelerator with an Arcturus GPU inside and HBM2 memory.
The Radeon Instinct family of accelerators takes aim at machine intelligence and deep learning workloads in the high performance computing (HPC) segment—it's not a graphics card for gaming, nor is it a professional GPU for content creation, in other words. AMD's current Radeon Instinct product consists of the following:
At present, the Radeon Instinct MI60 is the top dog. It launched in 2018, but soon disappeared from AMD's website. This wasn't because AMD discontinued the accelerator, and instead was part of a minor reshuffling of sorts.
"We are still shipping MI60 to customers. While customers want the capacity of MI60 with 32GB HBM2 memory, they prefer the price of MI50 so we created a new product, MI50 with 32GB of HBM2. This is the product we are actively promoting with customers," AMD told Tom's Hardware in October 2019.
The rumored Radeon Instinct MI100 would leapfrog the entire stack and take pole position. Back in 2018, AMD's unreleased Arcturus GPU was referenced in a Linux driver. Then in October of last year, the developers of HWiNFO added "preliminary support of AMD Arcturus" to the release notes for a beta build of their utility. Around the same time, Twitter user and prominent leaker Komachi sparked a rumor that we would see the Radeon Instinct MI100 with an Arcturus GPU inside sometime in the first half of 2020.

Well, here we are and once again, Komachi is claiming to have details about the Radeon Instinct MI100. His latest tweet suggests there is a "D34303" variant of the Radeon instinct MI100 that is rocking an Arcturus XL GPU. Furthermore, he points to it as having 32GB of HBM2 memory clocked at 1,000MHz to 1,200MHz, with a 200W TDP.
Komachi notes that this is a test board, so the clocks and TDP on the final revision could end up being a little or a lot different (or not at all). For reference, the Radeon Instinct MI60 has a higher 300W TDP. It's possible that Arcturus could see the TDP on the Radeon Instinct MI100 come in lower, though a 100W difference is probably optimistic for an accelerator that will presumably be AMD's fastest part.

As for the actual GPU, rumors are kind of all over the place. One of them pegs Arcturus as being a 7nm+ replacement for Navi. More recently, there has been chatter of Arcturus being a Vega-based GPU. All we can say for sure is that it's another GPU named after a bright start, just like Navi, Vega, and Polaris.