It was a little over a year ago when AMD somewhat casually mentioned a new X3D packaging scheme that combines chiplets featuring a hybrid 2.5D and 3D die stacking design, and now rumor has it this could be what underpins a specialized server CPU codenamed Milan-X. The rumor also suggests it could be arriving relatively soon, rather than years off in the distance.
AMD has not said a ton about X3D, though it did make an interesting claim last year, saying that hybrid 2.D and 3D die stacking would deliver more than a tenfold increase in bandwidth density. That's not small potatoes, especially in a bandwidth-hungry environment, and one as lucrative as the data center where AMD hopes to continue chipping away at Intel's lead (in terms of market share). 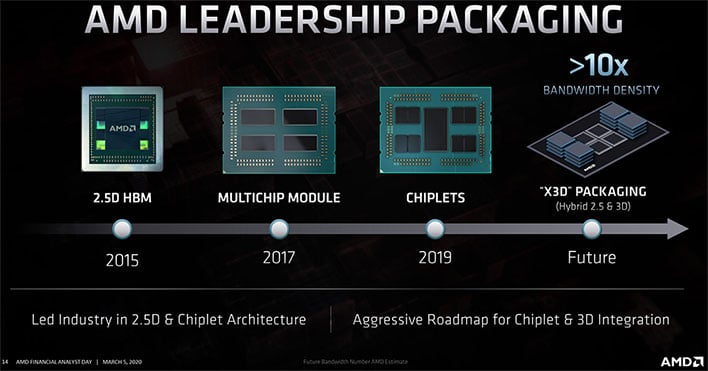 Assuming AMD's roadmap has not changed since last year, then X3D die stacking is the next evolutionary step in AMD's packaging strategy. What it showed off at the time was a diagram with four primary compute chiplets in a 2x2 arrangement, each of which is flanked by four stacked dies (possibly HBM chips). A sizable interposer sits underneath it all.
According to two prominent leakers—Patrick Schur and ExecutableFix—a stacked chiplet design is headed to a new Milan-X server CPU.

Schur shared the codename, while ExecutableFix added a couple of other bits—that it will also be called Milan-X(3D), and will consist of a Genesis I/O die with stacked chiplets. Also, they love lasagna, in case you were wondering about stacked pasta.
The clues are in the codenames. Milan is the codename for AMD's recently latest generation EPYC server processors based on its Zen 3 architecture, and the "X(3D)" in Milan-X(3D) is a clear reference to its X3D chip packaging technology. Likewise, Genesis also refers to Zen 3.
Put it all together and what the rumor suggests is a specialized server CPU based on Zen 3, with a 3D stacked chiplet design. Rumor also has it that AMD will be prioritizing a big bump in bandwidth, as alluded to last year, rather than high core and thread counts. So we might not see a 64-core/128-thread Milan-X CPU, but time will tell.
What's also interesting here is the implication for consumer platforms. It is not uncommon for cutting edge technologies to debut in the data center and then get ported over to client PCs in some fashion. That's not to say we will see a refreshed Zen 3 lineup utilizing X3D on the consumer desktop, but it's probably only a matter of time before something of the sort materializes (Zen 5 perhaps).