AMD has issued an advisory regarding reported Windows 11 versus Windows 10 performance deltas in certain games with its newly minted Ryzen 7000 series desktop processors. While the company has not observed any usual performance characteristics so far (and neither have we, for that matter), it is looking claims by those who say they have.
"We are currently investigating but based on testing to date have not observed a material difference in game performance between OS versions across a variety of operating scenarios and game titles," AMD states.
Some growing pains are normal when introducing a brand new architecture, socket, and chipset. That said, we didn't experience any quirks while reviewing the Ryzen 9 7950X and 7900X, and instead recorded big gains over Zen 3 (though the Ryzen 7 5800X3D held its own in our gaming tests). 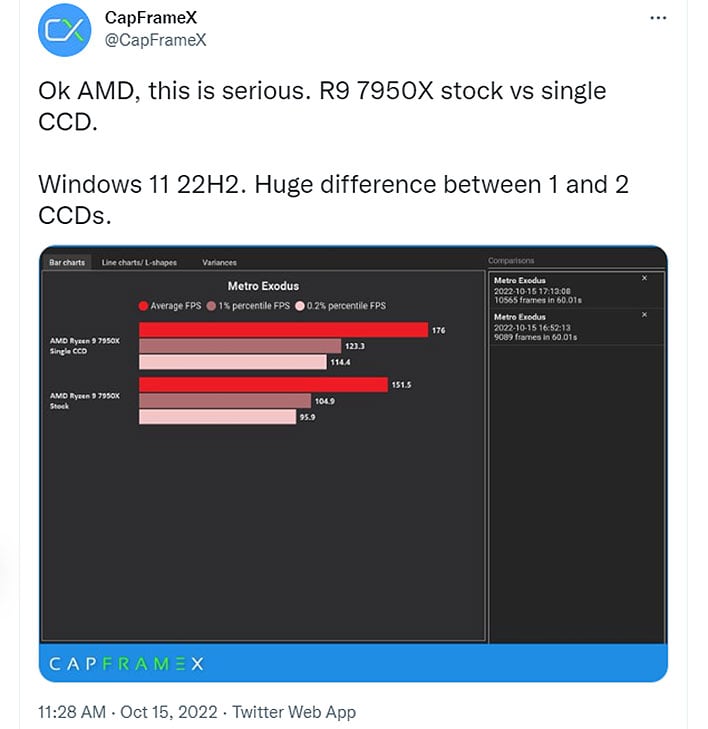 Others apparently have not been so lucky. We've also seen reports suggesting that disabling the second 8-core CCD in the aforementioned CPUs can provide a measurable performance boost in some games. CapFrameX posted a graph on Twitter (see above) that showed a sizable disparity in Metro Exodus on a Ryzen 9 7950X PC running Windows 11 22H2.
According to AMD, these kinds of things are not necessarily unusual and may indicate a need for optimizations on the software developer side of the equation.

"Many factors affect gaming performance, including the game engine, CPU architecture, GPU selection and memory choices. As new architectures enter the market, we often observe performance anomalies which must be addressed by the component vendor or the game publisher. This is not a new phenomenon nor is it unexpected," AMD points out in its advisory.
AMD also says that as these anomalies come to light, it shares with them with ecosystem partners and game developers so they can make the appropriate optimizations, if necessary.