AMD's next-generation Radeon Instinct accelerators are getting a massive boost in memory capacity. This was revealed during the virtual ISC 2021 event, in which the chief technical officer at the Pawsey Supercomputing Centre, Ugo Varetto, dished up some juicy details about the company's Setonix supercomputer, a 50-petaFLOP system powered some impressive AMD hardware.
Varetto said Pawsey received $70 million in funding to invest in replacing the company's computing network and storage infrastructure. Pawsey decided to buy a supercomputer with the funds.

"With the recently received funding, we acquired a brand new HPE Cray supercomputer named after a small marsupial endemic to areas close to Perth [and] in a separate procurement, we acquired 60 petabytes of object storage which will be soon be integrated with the HPE supercomputer in the future," Varetto said. 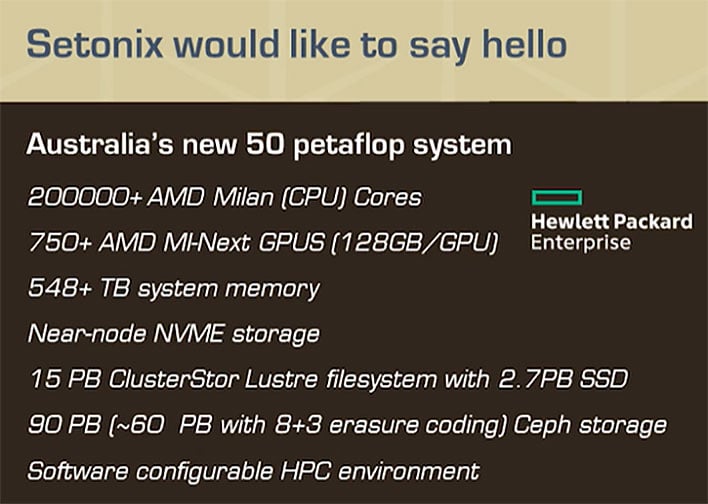 Pawsey named the supercomputer Setonix and it is tasked with some heavy duty data work, including radio astronomy. To do that, it is outfitted with over 200,000 EPYC 7003 series (Milan) server processor cores based on AMD's latest generation Zen 3 CPU architecture. If those are 64-core CPUs, then that works out to 3,125 CPUs. That alone is drool-worthy—you could definitely run Crysis with all that CPU horsepower—but it is the GPU revelation that is turning heads.
AMD has not yet announced its next-gen Radeon Instinct accelerators. According to Varetto, however, Setonix hosts over 750 Radeon Instinct MI200 accelerators based on AMD's next-gen Mi-Next GPUs, underpinned by CDNA 2.
Otherwise known as Aldebaran (via past leaks), the Mi-Next GPUs sport a multi-core module (MCM) design. Assuming Varetto's slide deck is accurate, each Mi-Next GPU is equipped with 128GB of memory, which is believed to be of the HBM2e variety.
That is four times as much memory as AMD's Radeon Instinct M100, which features 32GB of HBM2 memory. Other details about Mi-Next are not yet know, but the memory bump alone will benefit high performance computing (HPC) workloads.
As for Setonix, which Pawsey announced in February, it will be used for everything from discovering new galaxies to developing improved diagnostic tests for coronaviruses and solving "some of the most important research questions in the world." Good stuff.