A modder has managed to unofficially leverage AMD's FidelityFX Super Resolution (FSR) technology over to SteamVR titles, and while we have not tested it ourselves (not yet, anyway), the early impressions from those who have tried it out generally say it works pretty well. This follows in the footsteps of the Grand Theft Auto V mod, to demonstrate how potentially easy it is to implement AMD's open source upscaling wizardry.
To quickly recap, FSR has the same objective as NVIDIA's proprietary Deep Learning Super Sample (DLSS) technology, in that the goal is to render a game at a lower resolution and then upscale it. The upshot of this approach is faster frame rates—your GPU does not have to work as hard to render at a lower resolution, compared to, say, rendering natively at 4K.
There is an inherent tradeoff in visual fidelity, but does it matter? That depends on a number of factors, including the technique, the game, and the viewer's own eyeballs. Then there is the issue of so-called pixel peeping—taking a still frame and zooming in to compare visuals. Sure, you can see a difference that way, but as we recently highlighted, it is much tougher to discover a discernible difference when actually playing a game, which is where this kind of technology truly matters.
In any event, our early tests with FSR are encouraging, as is the stuff modders are doing with it in the early going. And to that end, kudos to Reddit user fholger for creating a mod to enable FSR in SteamVR games, which is available on GitHub.
"This is a best-effort experiment and hack to bring this upscaling technique to VR games which do not support it natively. Please understand that the approach taken here cannot guarantee the optimal quality that FSR might, in theory, be capable of," the modder explains.
"AMD has specific recommendations where and how FSR should be placed in the render pipeline. Due to the nature of this generic hack, I cannot guarantee nor control that all of these recommendations are actually met for any particular game. Please do not judge the quality of FSR solely by this mod," the modder adds. 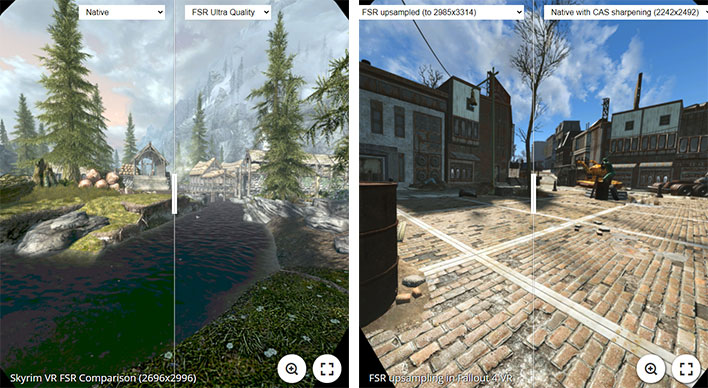 Instructions can be found on the GitHub page, but it is a rather simple hack to implement. It involves replacing a DLL file and editing a config file (back up both beforehand so you can easily revert back). The modder also posted some comparisons that, to our eyes, look pretty damn good. Here they are...
It's been pointed out in the Reddit thread that changing the SteamVR resolution while in-game can trip up the hack, and if that happens, just restart the title.
"Tested with Hotdogs, Horseshoes and Hand Grenades (H3VR) and it works great on my 1070. I feel that it makes the visuals sharper close up while the far distance has a slight blur. If certainly gives more benefit than it takes away, so this will be a permanent addition to my game. Thanks so much!," a user wrote after trying out the mod.
Sadly, this does not work with Half Life: Alyx (or Star Wars: Squadrons), because those games freak out if you replace the aforementioned DLL file. But maybe that will change at some point. The modder says they plan to continue working on the performance, quality, and compatibility of the hack, so keep checking the GitHub page for updates, if this is something that interests you.