AMD is evidently going to bring out the heavy artillery in the server space, if the latest round of leaks end up being accurate. Looking beyond what's on tap for AMD's next-gen Zen 4 EPYC processors (codenamed Genoa), it is said the Zen 4 lineup (codenamed Turin) will come loaded with up to 256 cores and 512 threads to tackle server workloads. Whoa!

There are numerous interesting nuggets associated with the later rumors regarding Turin. The big jump in cores and threads is one of them, but it's also said the EPYC 7005 series will slip into the same SP5 socket that is supposedly going to debut with Genoa. That's notable because Genoa will, by comparison, 'only' sport up to 96 cores and 192 threads.
That's a lot of cores, and there's also a rumor floating around that a subsequent Zen 4 EPYC lineup codenamed Bergamo will offer up to 128 cores and 256 threads in AMD's forthcoming SP5 platform. Turin, if the latest round of leaks are accurate, will go even further in core and thread counts, and do so without requiring a brand new platform. 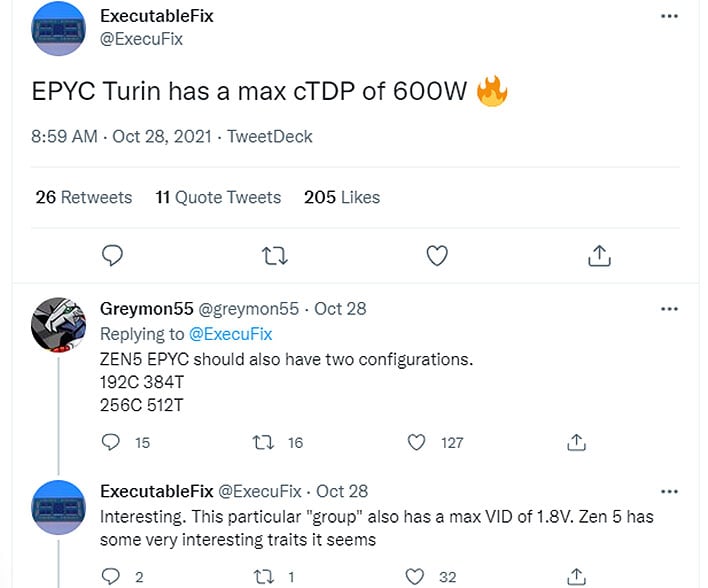 The purported 256-core and 512-thread count comes from @greymon, a notable leaker who was replying to another leaker, @ExecuFix about Turin's TDP. It's said to be one of two Zen 5 EPYC configurations, the other being a 192-core/384-thread chip. At the top end, however, we're looking at double the number of cores compared to Bergamo, in the same SP5 socket.

How AMD goes about this remains to be seen, assuming the information rings true. One potential path is to double the number of cores per CCD, from eight to 16, which would pave the way for a 256-core chip in a 16-CCD package. Or maybe AMD something else in mind, like stacking CCDs.
It's also said Turin will have a max configurable TDP of 600W, versus up to 400W for Genoa. That's a mighty big power envelope for sure. At the same time, leaked documents suggest SP5 peaks at 700W in a 1ms duration, with peak power capability rated at 600W. So it's all plausible.
We'll have to wait a relatively long time to find out, especially if AMD has two separate Zen 4 EPYC launches slated for next year (Genoa and Bergamo) and maybe beyond. It might be 2023 or even 2024 before we find out.