Have you ever woken up and just casually decided to break a world record that day, and then achieved that goal? Yeah, neither have we. It did occur to AMD, however, on the heels of launching its 3rd Gen EPYC processors for servers. Based on the company's Zen 3 architecture, its EPYC "Milan" series is some serious big iron, and AMD decided to demonstrate this by setting a Cinebench R23 world record.
There would be no helium, liquid nitrogen, or even liquid cooling in pursuit of the record, just a "pure old boring air cooling solution." For the record attempt, AMD rounded up a pair of EPYC 7763 processors based on Zen 3, which sit at the top of its server stack. Each chip wields 64 cores and 128 threads, with a 2.45GHz base clock and 3.5GHz boost clock, along with 256MB of L3 cache.
So for this benchmark run, AMD hammered Cinebench R23 over the head with 128 physical cores and 256 threads of computing muscle. The benchmark finished just a few seconds after it was initiated—pretty cool to watch—with the dual EPYC setup scoring 113,631 points in the multi-threaded test.

The score has already been submitted to HWBot, where it sits at the top, having beaten the previous record of 105,170 set by a Ryzen Threadripper 3990X processor that had the aid of LN2 cooling. In fact, the top 14 scores all belong to AMD hardware. The best Cinebench R23 score achieved by Intel's silicon is 45,731, obtained from a Xeon Platinum 8280. 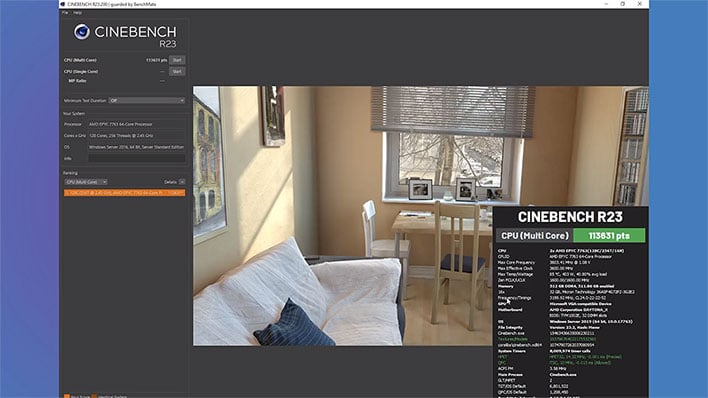 The new record is likely to stand for a bit, unless AMD decides to break it by itself. Server CPUs of the EPYC 7763's caliber do not come cheap. AMD's pricing in trays of 1,000 units is $7,890 per chip, so this record was set by $15,780 worth of EPYC silicon (the total value is even higher when you consider that this is bulk pricing).
More than just a fun demonstration, AMD is essentially flexing its server might, by showcasing what kind of extreme performance its top silicon can deliver. There's big money in the data center, so while AMD has earned itself some bragging rights, it really hopes to the catch the attention of potential buyers.
Good stuff, AMD.