Over the weekend we reported that the launch of the value priced A520 motherboards from AMD was coming soon. These boards are now finally out, boasting great options for I/O and bandwidth for all users and promising support for the future “Zen 3” architecture while also supporting current third-generation Ryzen processors.
AMD's products are priced well across the entire spectrum, and they are continuing this trend with the A520 series of motherboards. According to AMD’s slide (see below), the A520 chipset is nestled squarely between the A320 series and the B550 series. 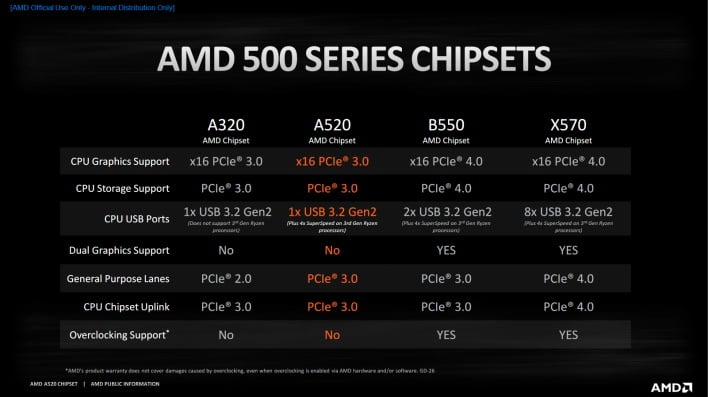 With the A520, the general purpose PCIe lane gets bumped up to PCIe 3.0, providing more bandwidth over the prior A320 chipset, but below the PCIe 4.0 that the X570 offers. This shouldn’t be a huge deal to most, as something like this wouldn’t be noticed in regular use cases unless you had a PCIe 4.0 SSD that you were testing.  As far as other specifications go, you can find them on AMD’s site or right here:

This lineup of specifications at this price point is pretty good; however, a slight catch between the A520 boards and B550 is support for overclocking. Your A520 chipset won’t allow for overclocking, so don’t go looking to ramp up your clock speeds and voltages trying to eke out every drop of performance. No matter what this chipset does or doesn’t have, it seems decent if you need something value-priced and doesn’t necessarily want all the bells and whistles. Many people don’t do overclocking anyway, so if you want to save a few bucks, you can drop down to the A520 series.

Looking at some of the manufacturers that have their boards on Newegg already, you could be looking around the $100 price point. Given that there will probably be sales in the future, this could be a good buy. It is up to you though what you need and ultimately what your budget is. No matter what, though, AMD is offering a pretty sweet upgrade to the A320 at an attractive price point.